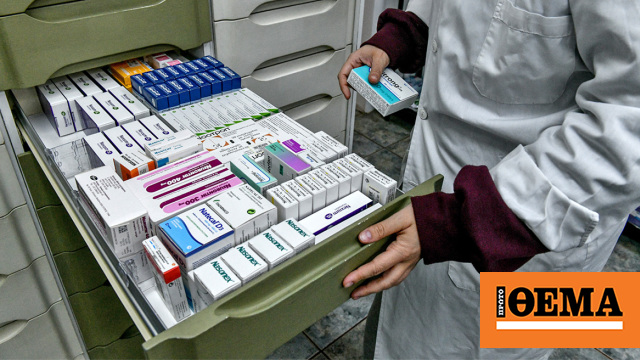 It is expected to be difficult in front of her Medication adequacy for Greek citizens against them the coming monthswhere level problems are exacerbated Packing materials And the raw materials. Our country is trying to preserve it Some stock in medicines So as not to increase the shortcomings and agreements With information on 777 preparations Pharmacies only give one box per pharmacy per order.

These preparations that have been put in order “controlled distribution”constitutes an important part of the pharmaceutical market, which is estimated at 36% in combination with oval medicines, the export of which has already been banned, it seems. That there is a difficulty of more than 900 preparation. Thus, these formulations constitute 55% of the total formulation market.


According to market information The situation in the coming period is expected to become more difficult Because of the absence of two of the most important pharmaceutical packaging materials: polyvinyl chloride and thin aluminum foil mainly used in pill packaging. At the same time there Big shortage of raw materials. For example, a multinational company sourced the active fluoxetine from India to produce a well-known antidepressant drug, but the production plant reported that volumes would be particularly low. Note that He said that the formula is not elliptical In the last appeal, its price did not change.

Another parameter mentioned by the market representatives is related to the possibility To replace an oval drug with another. For example, for a well-known elliptical antibiotic, there are generics, but the Greek industry is Produced not ready for mass production It does not contain quantities of raw materials. That is, the replacement process is not easy and immediate.

About the same thing happens to Paracetamol syrup for pain relief for children has already been around for a long time. Here, too, there is a similar generic, but the Greek company also does not have the possibility of immediate replacement for the elliptical.

Also a topic mentioned by the side From drug warehouses is also the “difficulty” of multinational companies in supplying the Greek market with medicines. The example they cite is typical, when a representative of a multinational company stated that limited production of drugs in certain classes forces the company to prefer serving larger markets where the formulations have a higher price tag.

This is one of the reasons for the Minister of Health Thanos Blevris with his message to the Commissioner in Charge of HealthStella Kyriakidou calls for an EU-wide centralization policy for the problem of drug shortages faced by all of its member states. European Union.

At the same time they exist Complaints from pharmacies That their main suppliers, despite the seriousness of the situation, are still … on vacation! In particular, the pharmaceutical company that distributes on the Greek market about 60% of medicines for multinational companies, will not open before the end of the week.. Also a Greek company that belongs to a large group due to software changes Formulas cannot be priced. So even though it still contains important MSYFA, it doesn’t for “technical” reasons direct it to the market.

So the basic recommendation that is there is that citizens should be particularly careful, both in terms of protecting themselves from viruses but mainly in terms of providing medicines that should be To do it literally.

In fact, this recommendation has also been made before Association of General Medicine Companies (EFEX), which confirmed in its announcement yesterday that citizens should take advantage of other alternative medicines that are widely available and that can be obtained under the guidance of the attending physician or pharmacist.

Additionally, in the context of promoting responsible self-care behaviors, o effex Recommends that citizens take measures to prevent infection by seeking information on relevant methods and preparations from A pharmacist.

An emergency update from Pleuri, in the afternoonAt the same time, Minister of Health Thanos Plouris, President of the Experts Union, Dimitris Filipou, and President of IFET Yannis Sotirio, will hold a press conference today at 17:00 at the Ministry of Health to deal with the identified shortage. pharmaceutical.


According to the information, the Minister of Health will conduct a comprehensive analysis of the announced measures to deal with the shortage of medicines, and explain the causes of the problem and ways to deal with it.

See also  The end of the Corona virus in China, an alarm in Europe