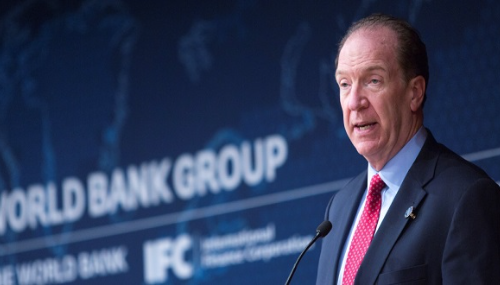 World Bank President David Malpass has warned that the conflict between Ukraine and Russia will have dire financial implications for the entire global economy.

Malpass spoke on CBS’s US television program about the impact of this escalation on food and oil prices, which have already reached a high level due to the inflation spiral.

Referring to the repercussions for Russia, to which Western countries are subjected to a series of sanctions, he noted that “if you can prevent the Russian Central Bank from working, it will have a real impact on Russia and the people.” The sanctions “do not appear to affect the oil and gas industry.”

The head of the IFC estimated that there would be short-term upward pressure on energy, including LNG, but that other options were available in the longer term.

“Markets are looking forward so they can look at a five-year time horizon and realize that there is a lot of energy available if it is mobilized, and there are alternatives to Russian dominance in the gas market,” he said. Regarding the World Bank’s response to this crisis, Malpass said his organization has “tools” to help deal with refugee flows as well as assistance programs in neighboring countries, and Ukraine is providing assistance.

The Managing Director of the International Monetary Fund, Kristalina Georgieva, for her part, estimated that the current crisis “already has serious economic consequences that will worsen as it continues,” warning that “the repercussions of this crisis do not extend beyond Ukraine. The conflict poses grave economic risks to the region and the world at large.”

“This crisis comes at a critical time as the global economy is recovering from the ravages of the COVID-19 pandemic and threatens to undo some of that improvement,” she said in a statement on Saturday.

The Director General of the International Financial Corporation spoke of “the implications for the financial system and its functioning, for commodity markets and, more directly, for countries with economic ties to the region.”

“We are ready to assist our member states if necessary, in close coordination with our international partners,” she said.