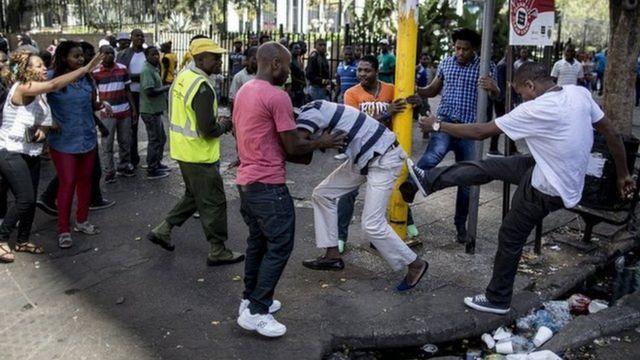 #other countries An AFP journalist noted that about 2,000 people demonstrated in Johannesburg on Saturday against migrant workers, in a sign of rising anti-immigrant sentiment in South Africa, which is grappling with record unemployment and poverty rates exacerbated by Covid.

South Africa sometimes suffers from rampant xenophobia. 62 people were killed in riots in 2008. Violent clashes killed seven in 2015 and at least 12 people in 2019.

Since January, a movement called Operation Dodola (“Retreat” in Zulu), which gathered only a few hundred protesters last weekend, has been gaining momentum. Its main demand is that unskilled jobs held by foreigners should be “repatriated” to South Africa.

Armed with patriotic flags and sticks, the group of black men and women again on Saturday voiced “fed up with foreigners,” this time on the streets of Hillbrow, a deprived district of Johannesburg known to harbor many immigrants in requisitioned places. by slum dealers.

“We are here to take back our country, our space is occupied by foreigners,” said Bhakani Thuy, 38.

On the sidewalks and balconies, the crowded neighborhood residents watched the procession, sometimes exchanging insults. “Go back to your country,” a protester fired in front of a group of men at the foot of a building. “We are here in Africa, sister,” replied a man in a tense atmosphere.

The rally was organized with a strong police presence. “The situation so far is still under control,” an officer on the ground told AFP. The shops had lowered their iron shutters. During previous xenophobic riots, attacks targeted businesses run by foreigners.

“We are not criminals,” fired the anti-immigrant leader who claims to be a pacifist, Nhlanhla Lux Dlamini. In his thirties, in his regular military uniform and flak jacket, he made it clear that he wanted to “defend the future of South Africa”. The procession went to several stores to demand the dismissal of the foreign employees.

There are 3.95 million foreigners in South Africa, according to official statistics, out of nearly 60 million residents, half of them live below the poverty line.

However, the continent’s leading industrial power, which is struggling with an unemployment rate of 35%, is attracting many economic migrants from Africa.

South African President Cyril Ramaphosa this week warned against “gatherings that try to provoke negative feelings and attitudes” towards foreigners.