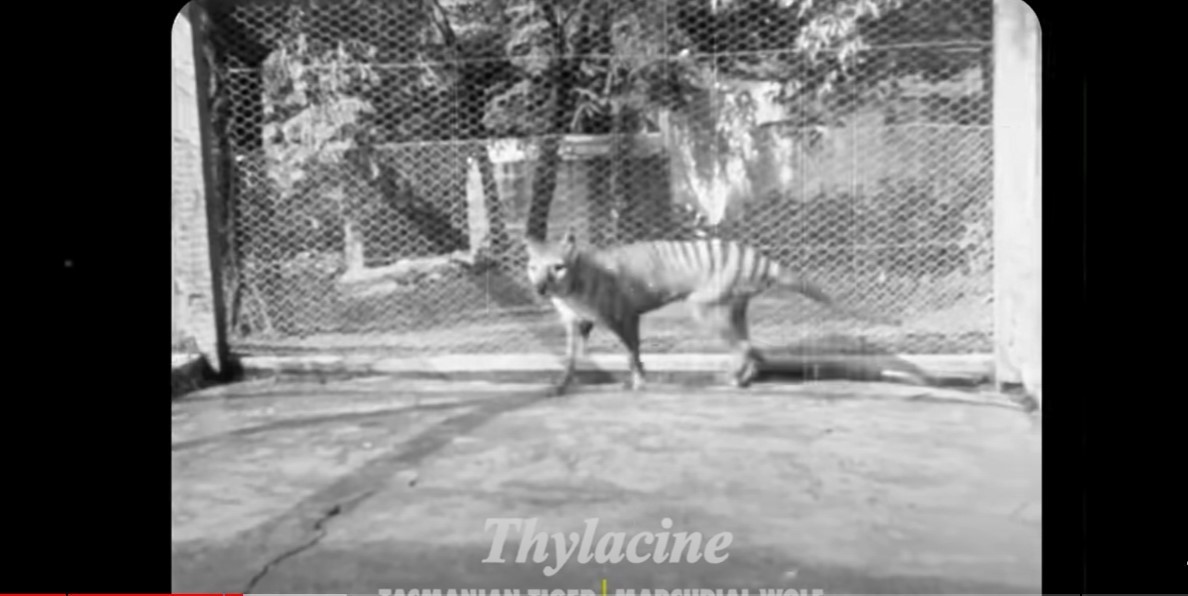 Tasmanian marsupial or tiger. Image from the video

Millions of years ago, the thylacine, also known as the Tasmanian tiger, was They were spread all over Australia.

About the size of an American coyote, these dog-like creatures disappeared from the mainland about 2,000 years ago.

However, few of their species remained in Tasmania until the 1920s, when they were massacred by European settlers who saw them as a threat to the rest of the fauna.

“It was a man-made extinction. European settlers came to Australia and brutally exterminated this animal,” says University of Melbourne geneticist Andrew Pask.

Pask leads a team of scientists who, along with a de-extinction corporation, aim to recreate a wolf-like creature and bring it back to life.

Thanks to recent advances in genetics, namely the advent of gene editing technology, Thylacine is not the only lost species that we could see again soon.

But how does the science of “extinction” work and what kind of ethical questions does it raise?

In the case of the thylacine, the first step is to sequence the extinct animal’s DNA. Pask did this in 2017.

“The great thing about Thylacine is that because it was such an important marsupial, every major museum wanted to have one in their collection. So there are hundreds of specimens around the world and some of them are very well preserved,” says Pask.

“Our sample was a baby that was forcibly pulled from its mother’s pocket. They shot the mother and immediately dunked the baby in alcohol, which preserves the DNA. That was the miracle sample and the holy grail for us in terms of being able to reconstruct that genome.”

Although the DNA is in fairly good condition, it is not completely complete. Over time, exposure to ultraviolet light and the action of bacteria break down DNA into smaller fragments.

This leaves scientists with the seemingly impossible task of finding a way to “capture” the different pieces of DNA together: a task similar to trying to complete a giant jigsaw puzzle without the image on the front of the box.

Fortunately, a small, mouse-sized marsupial called Dunnart (Sminthopsis in Greek) was able to provide a blueprint for DNA reconstruction.

“We found the closest organism to Thylacine, which is Dunnart,” Pask says.

Dunnarts and Thylacines share 95% identical DNA, which is thought to be highly conserved, meaning it hasn’t changed much over time.

However, simply knowing an animal’s DNA is not enough to bring it back to life. The next stage of the puzzle involves modifying the Dunnart genes to match the Thylacine genes. This can be done using Crispr-Cas9, the Nobel Prize-winning genome-editing method.

“We start with living Dunnart cells and start to manipulate all of these changes, so we’re basically engineering or transforming a Dunnart cell into a living Thylacine cell with Thylacine chromosomes,” Pask says.

All of these technologies exist, but no one had done it on this scale before because DNA processing technology was not good enough or fast enough. But now we have the technology and we’ve got a lot of investment to try and make this work.”

Once researchers obtain a thylacine cell, they must turn it into a developing embryo and then implant it into the uterus of a living relative of the species.

See also  Apple, Google and Microsoft want to end the password with the 'Passkey' standard

We’ve already made stem cells, which took us about five years. We are now putting these stem cells into embryos to see if we can get them to develop into a full, living animal. “

The thylacine is not the only species that can return in this way. Preserved fragments of woolly mammoth DNA were found frozen in the arctic tundra, meaning these large mammals could be making a comeback. Most mammoths became extinct about 10,000 years ago.

Uroch, a type of prehistoric cow, is the subject of ancient cave paintings around the world. He once roamed the plains of Europe and stood as tall as an elephant. It became extinct in 1600. Although a long time has passed, the Urochs genes can still be found in various cattle breeds across the continent, with descendants in Spain, Portugal, Italy and the Balkans. Geneticists are now “breeding” these species together to produce offspring closer to the traits of the Aurochs.

In 2003, researchers successfully cloned the Pyrenean Ibex, a species of goat that became extinct when the last surviving individual was killed by a falling tree. Unfortunately, the newborn clone died of a lung defect shortly after birth.

Do we pretend to be God?

Even if we could bring back extinct animals, there are ethical concerns.

The reintroduction of mammoths and thylacines could disrupt existing ecosystems. Since these animals went extinct, others will have evolved and adapted to take their place. Will these organizations suffer as a result?

Thanks to climate change, the environments in which these creatures lived may have changed drastically. Some of the plants that woolly mammoths fed on have also long since disappeared.

See also  Reiji had to fight for the Wii Sport as a bundle, and Miyamoto wasn't happy

So could mammoths survive on their own in the wild, and if not, who would take care of them?

Will they end up as exotic exhibits in a zoo?

“I don’t think we have to bring all extinct animals back to life. I think certain criteria have to be met,” Pask says.

“The disappearance of the thylacine is a ‘recent’ event, so its Tasmanian habitat is still there, and all the food it was eating is still there, so it has somewhere to go and it can thrive in that environment again.

This animal also played an important role in the ecosystem. It was a predator sitting at the top of the food chain. There are no other marsupial apex predators, so when it disappeared it left a huge void.”

Technology is also able to save endangered species

De-extinction technology can also be used to save living species that are on the verge of extinction, especially those with an extremely small genetic pool, such as White rhinoceros.

the Black-headed rodents They are one of the most endangered animals in North America – every mongoose alive today can trace its ancestry back to just seven individuals. However, researchers at the Santiago Zoo in Chile recently took frozen cells from a black-footed ferret that died 30 years ago and used them to create a clone, Elizabeth Ann.

with information from ΒΒ c