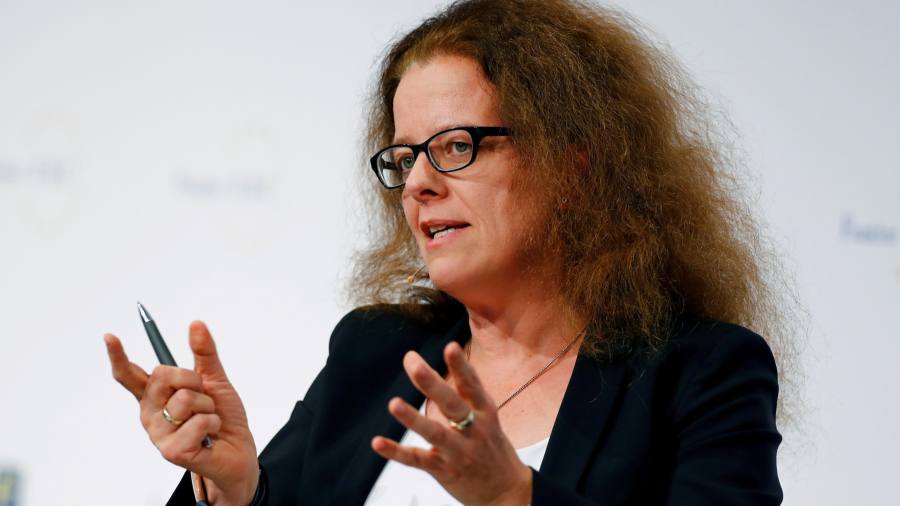 A greater “sacrifice” will be needed to tame inflation than previous bouts of monetary tightening, according to European Central Bank officials who have warned that price growth risks spiraling out of control if no strong action is taken.

Isabelle Schnabel, a member of the European Central Bank’s Executive Board, and François Villeroy de Gallo, Governor of the Bank of France, said on Saturday that European monetary policy should remain tight for an extended period of time.

Their remarks at the Jackson Hole meeting of central bankers from around the world in Wyoming, US, echoed those of Federal Reserve Chairman Jay Powell, who on Friday Pledge to “keep it up” to crush inflation.

The pace of price growth is at a level not seen in many advanced economies for decades.

“Central banks are likely to experience a higher rate of sacrifice compared to the 1980s, even if prices respond more strongly to changes in domestic economic conditions, as the globalization of inflation makes it difficult for central banks to control price pressures,” Schnabel said.

The sacrifice ratio measures how much pain central banks will need to inflict in terms of weak growth and fewer jobs in order to bring inflation back under control.

Villeroy said there should be “no doubt” about the bank’s desire to raise interest rates beyond the so-called neutral rate, a level that neither helps nor restrains growth. He estimated this rate to be between 1 and 2 percent. Villeroy said he could reach that level “before the end of the year,” adding: “Our will and ability to fulfill our mission is unconditional.”

Eurozone inflation is expected to hit a new record of 9 per cent in the year to August when the latest data is released on Wednesday.

Schnabel called for a “strong determination to get inflation back on target quickly.” She added that if the central bank is “downplaying the importance of persistent inflation – as most of us have done for the past year and a half – and if it is slow to adapt its policies as a result, the costs could be significant”.

The European Central Bank It ended eight years of negative interest rates last month by raising the deposit rate by half a percentage point to zero, overtaking previous guidance. Some members of its 25-person governing council are calling for consideration of moving forward with a 0.75 percentage point rate increase at its Sept. 8 meeting.

Schnabel, a former German economics professor who joined the European Central Bank’s board of directors at the beginning of 2020, is one of the central bank’s most influential voices in politics as head of market operations. And she warned that “unprecedented pipeline pressures, tight labor markets and remaining constraints on aggregate supply threaten to fuel an inflationary process that becomes increasingly difficult to control the more reluctance we act on it.”

Inflation expectations are on the rise among the public and professional forecasters, many of whom expect prices to continue rising more than the European Central Bank’s 2 percent target for several years, Schnabel said, adding that the institution’s credibility was on the line.

“Both the potential and cost of the current high inflation that is entrenched in expectations is uncomfortably high,” Schnabel said. “In this environment, central banks need to act aggressively.”

Villeroy, who is usually a centrist on the European Central Bank’s governing board, echoed the hawkish tone. But the French central bank governor indicated that he still believed that a 0.5 percentage point rate hike would be sufficient next month, saying he favored “another important step in September”.

The comments come a day after Powell’s comments Reset expectations On how much and for how long higher US interest rates need to be raised, as the Federal Reserve grapples with excessive price pressures driven in part by factors related to supply but also excessive demand.

The US central bank chief warned that efforts to calm the economy are likely to require a “sustainable period” of low growth, a weaker labor market and “some pain” for households and businesses.

Like his ECB counterparts, Powell said failure to successfully tame inflation now will lead to higher costs later, suggesting that the Fed is unlikely to halt the tightening cycle anytime soon.

In contrast, Bank of Japan Governor Haruhiko Kuroda, speaking from the audience during the question-and-answer section of the Jackson Hole panel, explained why his country has not aggressively tightened monetary policy.

“We have no choice but to continue the monetary easing until wages and prices rise in a stable and sustainable manner,” he said. Kuroda expects Japanese inflation to approach 3 per cent by the end of this year and then slow to around 1.5 per cent next year.