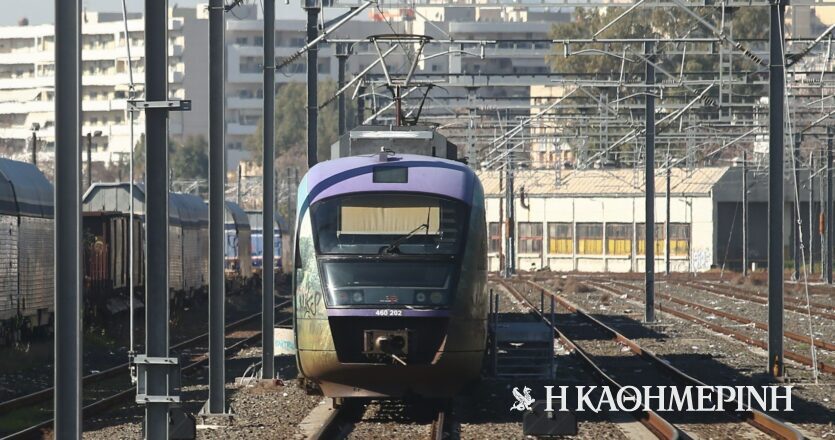 “Dear passengers, we would like to inform you today, Monday, 10/31/2022, that train No. 1317 (Kiato – Piraeus) has been canceled and the departure time is 12.59. Thank you for your understanding.” Such kind of updates by Hellenic Train (formerly TRAINOSE) to the general commuter via Telegram are not rare. The next day, the Kiato – Aegio train with a departure time of 09.03 was replaced by a bus except for Lykoporia station, while the Athens – Kalambaka train was 37 minutes late for Lianokladi station. “Cancellations” and delays as well as replacement of bus lines are likely to be major features of the daily operation of Greek railways.

For example, on October 25, 11 announcements were posted on the Telegram application, with the aim of informing the public that suburban routes in Athens and Patras will be delayed, not carried out or carried out by buses. On the same day, there were 8 updates on delays on intercity trains, and on October 20 updates were posted on delays and (some) cancellations for local lines in central Greece. The delays aren’t limited to tracks, with passengers claiming that updates via Telegram are delayed multiple times.

A number of complaints regarding delays and road cancellations have been submitted to the RAS recently, while some passengers, who also travel on very common hubs, have from time to time submitted complaints to RAS against TRAINOSE, control of which has been transferred since 2017 to the Italian state-owned company Ferrovie Dello Stato Italiane. RAS, which secondarily scrutinizes requests from passengers who are not satisfied with services, receives dozens of complaints every day. In 2021 alone, the year when roads and road capacity were limited due to the pandemic, complaints about Greek train services exceeded 4000. A large part of complaints about compensation payment, about the lack of information about road delays, as well as complaints about delays.

An example is the case of a female traveler who lives in Agioi Theodorou and commutes daily by commuter train in Athens to go to her job in Neranziotissa. In her complaint to the RAS in October 2020 (before Telegram was activated), she recorded, among other things, the frequent cancellation and without apparent reason of the routes on the line Athena – Kiatu – Athena. It refers to five cases of road interruptions, on July 23, 29, 30, 2020, August 12, 2020, and September 30, 2020, as well as information that came late for passengers regarding route cancellations. It claims that the company did not provide alternative transportation and basic services to meet the needs of passengers on canceled routes (eg water in hot weather). “I have been using the commuter train for several years since it first started, ie from 2005-2006. In the past, from 2005 to 2011, I don’t remember the problems I saw from 2020 onwards,” he tells K., adding that many Workers living in the province of Corinthia, as well as vulnerable groups, students, etc. They suffer from daily cancellations and delays.

Thessaloniki, October 1, 2022, 17.08, departure to Athens. The ETR Express (ICE 61), which aims to make the Thessaloniki – Athens route in 3 hours 55 minutes, has arrived just in time. The prediction of the arrival of 21.04 at the Larissa station, with an intermediary stop at Larissa, seems to have been confirmed, in the event, of course, that some unexpected event does not “disrupt” the smooth course of the train. In the old and apparently unmaintained station of Thessaloniki, relatively few people were waiting for the arrival of the ETR470, the high-speed train that made its maiden flight Athens-Thessaloniki in May 2022. The train is clean, waiting to welcome passengers, most of whom will travel in class seats. Economic, despite the 20% discount offered by the company on tickets until the end of October. ETR470 trains have 9 carriages, one of which is a restaurant-bar, 3 carriages of first class and 5 carriages of economy class. It offers complimentary snacks, water and soft drinks to first class passengers. The capacity of each train is 475 people, and the interventions made inside them provide a comfortable ride. As long as there were no unusual incidents, as happened in July of this year, when a power outage in the infrastructure (according to the company’s announcement) stopped trains, causing great inconvenience to passengers.

The trains are the Italian company’s most important investment move to date, whose goal, as written in the “K”, is to make the ETR470 compete not with cars but with aircraft. Trains plan to make the journey in less than 4 hours, but the journey time, compared to intercity (InterCity) trains, varies from 10 to 15 minutes. To achieve the goal, the company relies on the completion of infrastructure projects (remote control, signalling, etc.), so that rebuilt trains can develop higher speeds.

According to Hellenic Train, the network so far allows speeds of up to 160 km / h, when it reaches 250 km / h. “Nice, comfortable, but expensive,” Emmanuela tells K, who regularly used trains to Thessaloniki while studying there. As for the ticket price, an economy class ticket costs 55 euros, with the ticket going up to 65 euros for first class.

Blame the ping-pong between the OSE and the Italians, while the passengers suffer

What are the reasons why the situation is so problematic four years after the railway operator’s acquisition of TRAINOSE? Participants’ responses suggest a blame game between the OSE (which is responsible for lines, stations, etc.) and the Hellenic train. In the past, the tones of confrontation between them were higher. They have declined during this period, possibly because there is a new agreement between them also hanging on the price that the former TRAINOSE should pay for using the network.

The Hellenic train representative interviewed by “K” attributes the problems on the roads to many factors that can lead to “a combination of delays”, such as network failures, animals entering the line, power outages, etc. “The main problem is the infrastructure,” he argues. As far as suburban train delays are concerned, he estimates that the roads cannot cover the demand observed in the post-pandemic period, when there is a shortage of drivers and rail vehicles. “Investments are needed in the network, railcars, and people,” he says, stressing that it will take time, also because there has been no investment in rail for 20 years.

OSE, which is responsible for managing the railway infrastructure, is aware of the problems in the network and infrastructure, and estimates that they will be improved through reduction, maintenance and construction projects for the network. At the same time, it indicates the need to recruit (master station managers) so that problems can be resolved more quickly. But apart from the need to improve the infrastructure, OSE sources indicate that there has been insufficient investment in rail cars by the Italian company, with the result that the trains are few and outdated.

Recently, RAS contacted Hellenic Train for a hearing requesting clarification as to why it was not provided with information about delays and cancellations of suburban train routes in Athens and Thessaloniki during the summer. According to the information, the company reported that in July 2022, the cancellations on the Athens and Thessaloniki trains were due to a shortage of train drivers due to illness, while the delays are also due to infrastructure problems. Thus, according to the data from the Hellenic train that arrived on the flag “K”, in July 2022, out of a total of 2,940 scheduled routes in the suburbs of Athens and Thessaloniki, 246 (8.3%) were canceled or canceled, with the part due to the shortage of train drivers due to illness.

This resulted in one in two not being able to perform the assigned routes because he had fallen ill due to COVID-19 etc. In September 2022, there were fewer cancellations as fewer sick employees were called up. Thus, the number of canceled routes in the suburbs of Athens and Thessaloniki reached 133 out of a total of 2856 routes. Meanwhile, Hellenic Train has started hiring 71 train drivers, who will take over soon, while it recently announced the hiring of technical staff for its facilities in Athens and Thessaloniki.