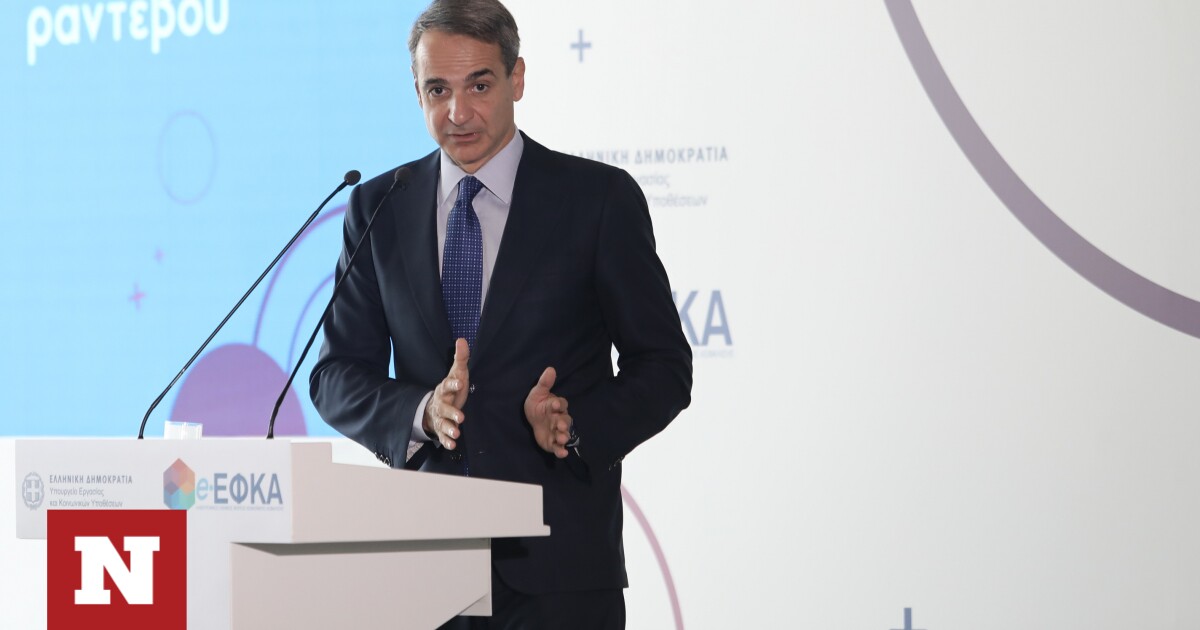 
At the Pending Retirement event held at the “Hellenic World” Cultural Center, both the Prime Minister, Kiriakos Mitsotakis, As well as government officials. “It is our duty not to be complacent, we owe it to our conscience and to our 6.5 million policyholders”A message from the Minister of Labour, Kostis Hatzidakis.

The Kiriakos Mitsotakis For the first time, he invited Kostis Hadzidakis to head the Ministry of Labour. He is Mr. Hatsitakis recalled the pause and insisted: “Mr. Hatsitakis my choice was completely justified.”

He stressed that we should adopt three good practices and that the biggest problem of pension arrears has no ideological significance, the Prime Minister said. “Pensions should be disbursed soon,” he said, adding that 2019 was a sad year for those who received them.

The Prime Minister said that changes can be brought about in the way the hard core of the state works and structure can be created.

refers to EFKA, said he saw a model that could be applied to other public institutions. A model that starts primarily from trust in employees. As Kyriakos Mitsotakis said, the goal is for public services to compete with private companies.

“Unlike vaccine surgery, here we had to deal with setbacks from past and current work,” said Mr. Mitsotakis said that the more than 470,000 pensions granted in 22 months is a very important achievement.

“We don’t stop here”Prime Minister’s Message Kiriakos Mitsotakis. “Government respects citizens, especially our weaker fellow citizens,” said Mr. Mitsotakis said, in consultation with the Ministry of Finance, that the increase in pensions will exceed 7%, combined with the abolition of the solidarity tax and the requirement of timelessness. 250 euros will be given to low pensioners.

However, he also mentioned the EFKA workers who lost their lives, insisting that we should remember them for their work.

The Minister of Labor said that today is a day full of great contentment and emotion. Kostis Hatzidakis. He also characterized the effort to settle pending pensions as very difficult. “I always remember the conversation we had with the Prime Minister when I took over as a minister.”He insisted that the pending pension issue should be dealt with.

In fact, he also mentioned the efforts made by both Yiannis Vroutsis and EFKA’s previous commander. He also said he received more than 1 million different insurance claims in 2019.

He even remembers a photo showing him with tons of files of pending pensions and other issues that needed to be resolved. Over 30,000 unregistered pensions have been resolved.write down

Indeed, he also referred to the “battle” faced by tax office staff. “We saw a reaction when we introduced accelerated pensions. There were reactions that these pensions were unconstitutional. We also saw a reaction to the bill for the modernization of EFKA”He emphasized the choice he had to make and noted: “If we have to choose between unionists who want immobility, we go with millions of citizens.”.

2021 was a record for him EFKA, as many were provided. 2022, if pensions are pending, will be a record year. “The 2016 – 2021 shares are now permitted with some exceptions, the issuance of which is illegal.” He also asserted that 85% of the pensions demanded by 2022 have already been disbursed.

Now, EFKA can issue more than 1,250 pensions per day, up from 500 pensions issued in 2019. Mr. Hatzidakis said. “All this was done with less than 900 employees at EFKA”Labor Minister said.

Within a year and a half of its operation in 1555, many were served. “Digital KEPAs are a Reality”He emphasized that the goal is to provide additional digital services. “We fought for months”, he said and thanked everyone who contributed to this effort. But he also thanked them Yannis Blagiodakis And Takis Theodorikakos But Ministers of State and Digital Governance Minister Kyriakos Pierrakakis collaborated with him from start to finish on this journey. However, he thanked the Prime Minister. Kiriakos MitsotakisFor whom he was firmly in his support, he said EFKA As well as continuous efforts.

Pierrakakis: Whatever for pending pensions

Minister for Digital Governance, Kiriakos Pierrakakis, referred to pending pensions and said that the government has a major objective to resolve the issue. Mr PENDING PENSIONS.

Deputy Minister of Labour, Panagiotis Tsaklougou, taking the stage, referred to the long-term problem of pending pensions. Timely disbursement of pensions prevents the image of poverty among pensioners, Mr. Tsakloglo recounted an incident that shocked him.

Mr. Tzakloklou blamed Syriza because – as he said – the funds were very carelessly consolidated under one fund. However, he stressed that the government’s intention is to pay all outstanding pensions to the waiting pensioners. “Pending pension was a painful experience for the pensioners but for EFKA it was a motivation to show his good face”Deputy Labor Minister added.

See also  Station 19 Season 6: When will it Premiere?

In fact, he breathed his last and made a special note to the EFKA executive who was shocked by his death.

The commander of EFKA said, Panagiotis DoufexisLooking back at the past, he emphasized that this year marks the 100th anniversary of the establishment of the institution. “The Social Security System has faced many challenges in 100 years”He said there were gaps in the system, but gaps that the government had worked hard to fill.

e-EFKA, he said, is intertwined with suffering. “Pension delays are one of those problems.”He said characteristically, stressing that they could not be unrelated. “We are not afraid to work with private sector companies. We have implemented a number of tools to help provide pensions and speedy procedures.”he added.

EFKA commander noted that in 2022, we will break the new record of outstanding pensions. “We have restored credibility in the public system by providing pensions. We have developed a new mechanism for disbursement of pension without delay”Emphasizing that EFKA has 1555 serving more than 2.5 million citizens.

“We are freeing the employees from the award of mains for the award of recruits. We are building a special control tower as a subsidiary and at the same time”EFKA’s commander added that a new integrated information system is planned. “We are in the process of recruiting new employees. From 1/1/2023 productivity premium will be applicable to all employees”He insisted.