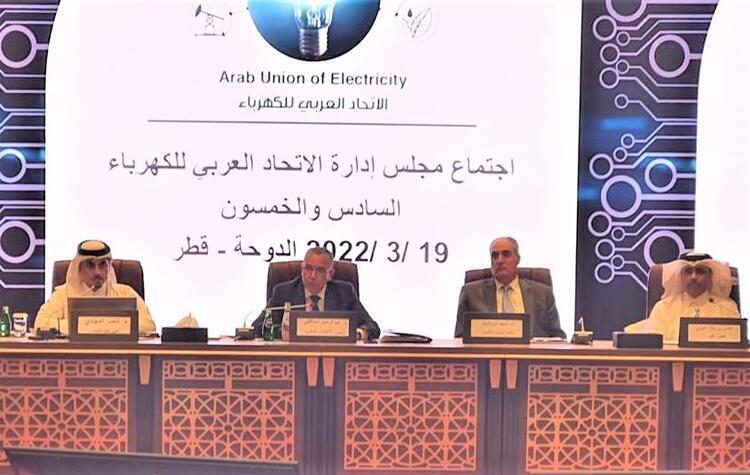 On March 19, 2022 in Doha, Qatar, Abdul Rahim Al Hafidi, Director General of the National Office of Electricity and Water and President of the Arab Electricity Union – United Arab Emirates, chaired the 56th session of the Board of Directors and the seventeenth General Assembly of the Union with the participation of each of the general managers of electricity operators in the Arab member states of the State The United Arab Emirates.

During this meeting, Mr. Al Hafidi presented the achievements of the United Arab Emirates during the mandate of the National Office for Electricity and Water since assuming its presidency in December 2018.

During this period, a strategic vision was developed to create a new model for the modernization of the Arab Electricity Union, to meet the challenges posed by the profound changes in this sector at the global and Arab levels and to allow it to strengthen its role. Such as major international organizations and support Arab companies to face future challenges related to securing electrical power supplies to Arab countries at the best cost in addition to strengthening electrical interconnection.

Among the first actions to embody this new vision, the completion of the study of restructuring the union by an international consulting company, as well as the appointment of a working team led by the National Office of Electricity and Drinking Water, which supervised all stages of the completion of this study.

The main achievements relate mainly to the development of a roadmap translated into action plans that led to the modernization of structures and mechanisms and the restructuring of the Union, as well as the adoption of an effective system of governance, in addition to the reorientation of its mission and objectives to enable it to face the profound changes that the electricity sector is going through at the global and national level Arabi.

The UAE has succeeded in facing these challenges despite the strong health epidemic impact on the electricity sector at the global level, which prompted companies to take new measures to ensure the continuity of electric power supply under the best conditions.

In light of the significant progress made within the UAE during his presidency, Mr. Al Hafidi was re-elected, by an overwhelming majority for the second time in a row, as President of the UAE for the period 2022-2025 and this is finally the meetings of the Board of Directors and the General Assembly in accordance with the articles of association of the UAE United Arab Emirates.

The members of the Union expressed their warm congratulations to Mr. Al-Hafidi and their commitment together to achieve ambitious projects and make the UAE an organization that occupies a prominent position in the electricity sector in the world.