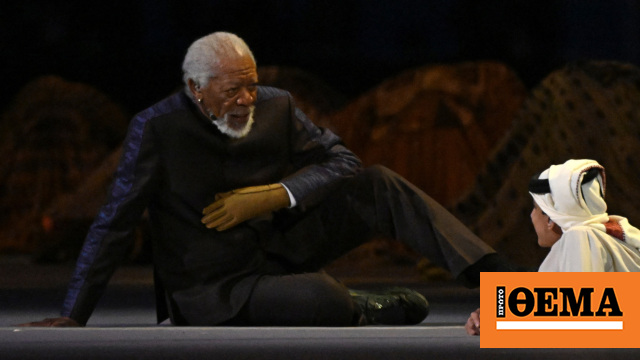 The big celebration of The beginning of the World Cup in Qatar before Morgan FreemanWho appeared in the stadium, unexpectedly, and was applauded by thousands of spectators.

When the lights went out shortly after the ceremony began, everyone was anxiously waiting to see what would be revealed and the surprise was Morgan Freeman.

The Hollywood star had a presenter-narrator role in the spin-off of the party which was titled “Let’s Get to Know Each Other Better”.

But those who were in the square and watched the ceremony from their screens noticed this American actor He was wearing a glove in his left hand.

The Brand He explains that this accessory has been worn at public events for years. The reason is a car accident that Freeman got into in Mississippi in 2008, when his car overturned and the actor was seriously injured. He even had to undergo surgery on a nerve in his left arm, which left him partially paralyzed.

Freeman explained to People magazine in 2010 that he still has problems with his hand: “I can’t move it and if you don’t move it, it swells up.”

A tight rubber glove helps him keep blood flowing to his hand, though he doesn’t have to wear it all the time.

The ‘hidden’ message behind this year’s mascot selection

The show, of course, could not miss this year’s World Cup mascot. The “La’eeb” It was revealed last April, during the final draw for the Doha World Cup.

However, his name was not chosen at random. “La’eeb” is an Arabic word that means a very skilled player, who encourages everyone to believe in themselves and aims to bring the joy of football to everyone.

See also  What will the 49ers do with Jimmy Garoppolo?

“He will be a player everywhere welcoming the crowd, inspiring the young fans and cheering the action through the tournament,” FIFA said on its official website.

What happened at the party

“Look who we are, we dreamers, we will make it happen because we believe in it…”

These are the words of Dreamers, one of the official songs of the 2022 World Cup, fully reflecting what the Qataris tried to show through the opening ceremony of the Games, but also what they want to achieve in this month when the eyes of the whole world will do so. addressed to them…

In an impressive setting, with a strong Arabic element, but also in an apparent attempt to prove that everyone is welcome in Qatar, they served the best appetizers for the opening match…

When the lights went out, the surprise was revealed: it was Morgan Freeman.

But the absolute protagonist of the first part of the ceremony was Ghanim Al Muftah, also known as the “miracle boy”. Mr. Muftah suffers from Caudaul Regression Syndrome, a rare disorder affecting the lower spine, but is still studying at Loughborough University, taking a short break to be in Doha and at the Opening Ceremony with Freeman.

The next part of the party saw musical sounds from the western world with memories of past World Cups, as mascots from previous events also appeared to welcome others. La’ eeb The mascot of the World Cup 2022, while all appearances and flags of countries were displayed, and slogans for each of the 32 teams were heard from loudspeakers.

Immediately after, he was on stage Jungkookthe BTS singer performs “Dreamers” in awe, followed by saluting the Emir of Qatar Tamim bin Hamad Al Thani.

«How nice it is for people to put aside what divides them to celebrate their differences. May this tournament be filled with inspiring days of kindness and hope. We welcome you all to Doha.” His brief message also marked the end of the ceremony as the crowd applauded as we entered the final stage to start the tournament.

“The Ship of the World”: an eyewitness confirms the allegations of Father Antonio’s indiscretion

Donald Trump: Thanks Elon, but I’m not going back to Twitter