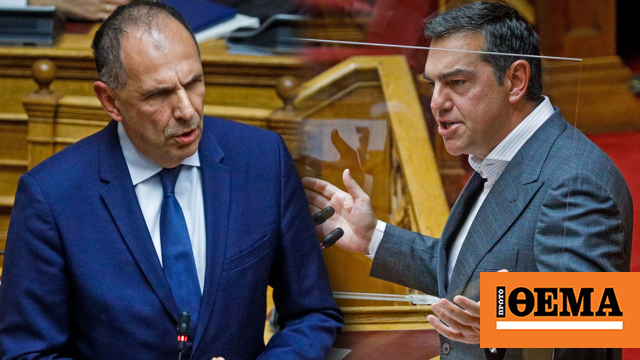 At 18:00 the debate on the motion of no confidence in the government presented by the SYRIZA president begins. Alexis Tsipras, Wire graft onto the case.

The proposal was accepted by the government as announced by Minister of State Giorgos Gerapetridis during his intervention and asked to start the discussion immediately. The process will be completed on Friday when the Prime Minister leaves for a scheduled visit to Japan. From the SYRIZA side, Dimitris Sanakopoulos and Nikos Filis will present, while Dimitris Markopoulos from the ND will speak first, while Development Minister Adonis Georgiadis will be in government seats. From PASOK, Evangelia Liagolis will be the speaker.

read more: Mitsotakis on Tsipras: The motion of no confidence was welcomed and I challenged him for months to do so.

During his speech, Alexis Tsipras spoke about the “criminal network” at Maximos Palace, led by the Prime Minister. Kiriakos Mitsotakis. Among other things, during its installation, it exposed the contents of the received folder ADAE’s president, Christos Rammos, after his initial request for mergers.

“For six months, Kyriakos Mitsotakis has been lying that he didn’t know,” commented Alexis Tsipras. He repeats lies on television and in parliament. Alexis Tsipras defended Christos Rammos, head of the ADAE, saying he was a supreme judge who was honest and did his duty as dictated by the country’s constitution. He emphasized that the country has laws and people are flexible. Addressing the government, the SYRIZA leader raised his voice saying that they are treating him rudely and as he said it is shameful.

“The prime minister and the government are irreparably guilty in this case of diversion. They have not only political, but also personal and legal responsibilities,” argues the SYRIZA-PS leader, adding that “those who have turned even our national security into a wiretapping and intimidation department remain in the government of the country, dangerous to democracy, national security, rights”.

The official opposition leader insisted, “After revealing everything, now with evidence, we want Greece to be a European law, this government cannot stay in its position for a moment, this prime minister cannot stay in his place for a day.”

For these reasons, he added, “as the first step in our journey to the people to protect democracy, transparency and justice, we present a motion of no confidence against the Mitsotakis government.” He noted that there will be three days of debate in parliament, “Mr Misotakis will come here and give explanations, be accountable, answer and parliament will be forced to decide: democracy or diversion”. Whatever the answer, I am sure that the final and correct answer to that question will soon be given by the Greek people,” he stressed.

Gerapetridis for Audit Motion: We thank you

Minister of State George Gerapetridis He accepted the censure motion and addressed, among other things, Alexis Tsipras: We are grateful to you because we will have the opportunity to protest.

The government is asking for the meeting to be held immediately, Gerapetridis said, adding that it should be completed by Friday as the prime minister will leave immediately for an official visit to Japan. As said by the Speaker of the Parliament, the meeting is adjourned till the 6th when the procedure starts.

We are moving the no-confidence motion to preserve justice

The government cannot sit idly by

At critical moments, we must accept the responsibility that falls upon us

I am well aware that this is not just about a faction, it is about the constitution, the rules of the political game, it is about every democratic citizen, be it left, right or centrist.

We have a historical responsibility

Are our commanders in doubt about our national security?

Why monitor the Energy Minister?

The EYP asked the army of the armed forces, even the two leaders, for two years

In the face of falsely attempted cover-ups, the Greek people have a duty to know the truth.

And for all the links found, the answer I got officially on file is 6/6

Labor Minister Mr. Hatzidakis, President of Gita Mr. Mr. Floros, President of GES. Lalucis, former National Security Adviser Mr. If Diakopoulos is present, he has officially requested that an audit be carried out by the Authority. and Mr. Liakopoulos

In this file Mr. There are illegal parastatal projects set up by Mitsotakis

For those wondering what is in the file I received from ADAE, the questions are resolved

Shame on the judge who does what the constitution says. The Constitution was won with blood and we will defend it with blood

Mr. Gerapetridis, how do you bully this man?

Blinded by power, dominated by pro-government media, he believed he could go against the constitution.

He chose it because, being the brains behind the parastatal, he knew there was evidence of surveillance.

Because he didn’t answer directly

He did not answer a question, he dissolved the meeting before its time, so he did not answer, preferring to embarrass himself rather than answer the question I asked him.

In fact, he tries to act ignorant in his interviews, like in Parliament on 08/10.

For six months, Mr. Wherever Mitsotakis stands, he lies that he didn’t know, and it’s always said that surveillance didn’t take place.

In the beginning you talked about fictional productions, listing distortions and character assassinations

It demonstrates a departure from democratic order, mob action, omerta

When journalist Koukakis accidentally discovered he was being monitored, he was unmoved but legislated that the Independent Authority could not inform him after his surveillance was over.

With the signatures and knowledge of an attorney, whoever is asked, she signs as long as she is asked.

For those who didn’t open the malicious message, there was another option, a legal one

He deliberately created an Orwellian crisis, with dozens of victims, among them many ministers, among them the leader of PASOK, among them, Mr. Spirtzis, economic factors, journalists.

It interrupts the things you discuss in your private moments

He made this dirty network available to foreign, advanced systems

He appointed his son-in-law to coordinate this network

From day one, he took the EYP into his office, placing his own person as commander of the EYP.

Armed forces officers, ministers and others were targeted by a criminal network, he said, based in Maximou and coordinated by the country’s prime minister.

Procedure provided for motion of no confidence

A “motion of no confidence” is a motion presented by an opposition party in the Hellenic Parliament with the intention of removing the confidence of the House from the government or its member.

The regime governing procedure is primarily described in Article 84 of the Constitution and in more detail in Article 142 of the Rules of Procedure of Parliament. According to Article 84, a motion of no-confidence can be moved if signed by 1/6 of the total number of MPs (i.e. 60 MPs) and must clearly contain the grounds for the MPs to withdraw their confidence from the government. by a whole or its members.

Members of Parliament submit proposals to the Speaker of the House during a plenary session of the House. As mentioned above, if the motion is signed by the minimum number of representatives, Parliament suspends its work for two days in case the government requests that the debate on the no-confidence motion be started immediately.

As far as the time limit is concerned, Parliament’s rules of procedure indicate that the debate in plenary shall be concluded after midnight on the third day with a roll-call vote. According to Article 142 of the Rules of Procedure of Parliament, the debate on a motion of no confidence begins with a speech by at least two representatives from the signatories. At the same time, a complete list of mass speakers is prepared by the end of the two MPs’ speeches.

What Erdogan’s Blockade in Sweden Means for Greece for NATO

When and where bad weather strikes – risk of flooding in Attica