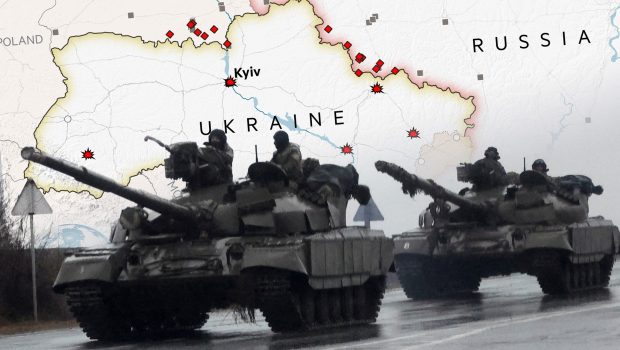 war in Ukraine She has entered her second calendar year and is at a very critical juncture. six weeks out Kherson liberation There is still no movement on the front lines.

As he writes British journalist Dan Sabbah in the GuardianIt seems that the Ukrainians are not ready for a counterattack. Also, the weather, which was above zero, does not help because of the muddy terrain, which is not conducive to military maneuvers. “Situation Stuck”, he told the BBC Last week, the head of Ukraine’s military intelligence service, Kirill Budanov, did not help Kyiv, which urgently needs to maintain its momentum before spring.

The goal is the victory of Ukraine

Volodymyr Zelensky, during his New Year’s speech, once again stated that the country’s long-term goal is victory in the war. Twice he referred to the liberation of Melitopolis, the capture of which would cut off access to the land bridge, without which the Crimea could not be supplied. Moreover, the Ukrainian president said that “our grandchildren will be able to eat watermelons in Kherson and recently liberated cherries in Melitopol” in the future.

So far, Ukraine’s strategy seems flexible and constantly exposes Moscow’s weaknesses. And the other areas that Ukraine is putting pressure on, near Kreminna and toward Svatove in Luhansk, are not nearly as important from a strategic point of view. On the other hand, in the Donbass region, Ukraine is still on the defensive, absorbing Russian bombing.

Vladimir Putin said the aim of the special military operation, as he insisted on calling it, was to protect “our people on our historical lands in the new lands of the Russian Federation,” referring to the four regions that Moscow unilaterally annexed in September.

The Russian president insists on his goal of capturing entire regions, which explains the continued attacks on Bakhmut throughout the fall and winter.

In any case, the slow to meager advance at Bakhmut is one of many indications that Russia lacks offensive fighting power.

In an interview with Ukrainian television, the head of Ukraine’s Military Intelligence Service, Kirill Budanov, said that Russia had gone from firing 60,000 missiles per day in August to 19,000 to 20,000, which explains why Russia is so keen to buy weapons from Iran and the North. Korea.

Russian ammunition is running out

Much of Moscow’s military effort involves the heavy and relentless bombing of Ukraine’s energy infrastructure, leading to prolonged blackouts in major cities. But there are other signs that Russia is losing its grip: Moscow fired some 20 cruise missiles at Ukraine on New Year’s Eve. The number is great, but it doesn’t compare to the 80-100 missiles I fired some days in October and November, although a few days earlier, in December, 69 missiles were fired at Ukrainian targets in one day.

At the same time, Ukraine’s air defenses appear to be improving, especially against Shahed drones. On Sunday, the Ukrainian Air Force said it had shot down all 32 drones that had risen since midnight, while only one vehicle was damaged in Kyiv overnight. The situation is still dangerous and difficult to predict, but Moscow’s attack on Ukraine’s energy grid has not weakened the Ukrainians’ resolve.

Putin is preparing for permanent war

In any case, as Putin stated, Russia is preparing for a long war. About half of the 300,000 Russians conscripted last year are not yet on the front lines, and Ukraine warns a new draft could come within days.

Also, even if Russian ammunition stocks dwindle, Ukraine may find it difficult to gain ground in any future counterattacks, especially if its adversary deploys its forces effectively.