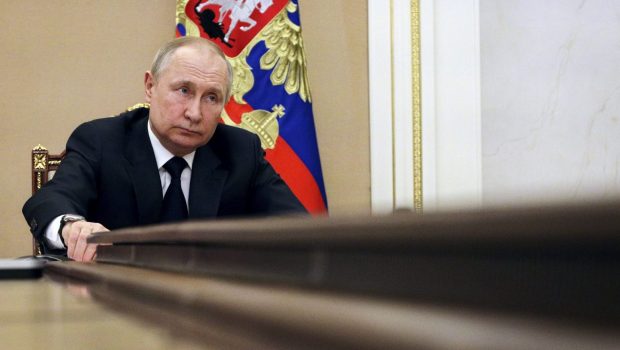 The Russian President Vladimir Putin He reads history well. In the distant months of solitude, during a pandemic, some say, s President of Russia He was “trapped” in the Kremlin archives, filling up on his country’s past as a superpower and dreaming of its restoration.

He admires the first Romanovs, who established their rule at the turn of the 17th century, while comparing himself with Peter the Great – he writes economic The Tsar who seized the lands of Sweden and turned Russia into a dominant power in the Baltic region.

Read also: Will conscription be the last straw for ethnic minorities? Fears of a “disintegration” of Russia

In 2014, Putin’s forces captured Crimea in southern Ukraine. Eventually the people there got Russian passports. At the time, this move seemed only opportunistic. The annexation of Crimea was popular among Russians, many of whom considered the transfer of territory from the Russian Federation of the Soviet Socialist Republics to the Ukrainian SSR in 1954 as illegal.

But the capture of Crimea and Russia’s support for rebels in Ukraine’s Luhansk and Donetsk provinces now look like steps in a grand plan to seize more Ukrainian territory.

In a speech delivered three days before Russian missiles began striking Ukrainian cities in February, Putin lamented the loss of “the lands of the former Russian Empire.”

Eight months after the invasion, his forces now control about 15% of Ukrainian territory. But the situation is not going according to plan.

The counterattack in Ukraine continues to repel Russian forces. On September 30, after mock referendums, Russia announced that it had annexed four eastern and southern regions of Ukraine, although it did not fully control them.

Announcing the move, Putin denounced the “false rules” of the West, including the inviolability of borders.

But his conquest weakened Russia, not its strength. By attempting to invade a neighboring sovereign country, he attempted to defy history. And now, it failed.

After the end of World War II, wars between nations declined for many reasons. This does not mean that they have disappeared. Nor is the reduction of interstate wars the same as peace: civil wars (such as the one now raging in Ethiopia), state repression, and mass violence continue to cause enormous human suffering.

Wars of independence from colonial oppression were often very deadly. But examples of a country sending its armed forces across its borders to fight another country’s forces are becoming less common.

However, what Putin is trying to do is much rarer than war between countries: an imperial invasion, or the conquest of a country to make its territory his own.

As historian and author Yuval Noah Harari wrote this year, “Most governments have ceased to regard aggressive wars as an acceptable tool to advance their interests, and most nations have ceased to imagine conquest and annexation of their neighbours.”

Saddam Hussein erroneously believed that other countries would allow Iraq to “swallow” Kuwait in 1990. Most examples of such attempts – such as India’s absorption of Goa in 1961 and Sikkim in 1975 – go back further.

China can try it in Taiwan. But with the exception of Putin’s efforts and conflicts over uninhabited border areas or small islands, this phenomenon has almost disappeared.

The dramatic decline did not happen by accident, which is why Putin’s aggressive war in Ukraine was so unusual that it was unlikely to succeed.

Putin’s use of force is an exception

As a great and deadly war, Putin’s invasion of Ukraine seems unusual compared to historical trends. But his goal, to use force to permanently expand the vast territory of his country, is not merely a rare occurrence, it is an aberration, as The Economist points out in its analysis.

According to Correlates of War data, there were no major invasions from the late 1970s until the capture of Crimea in 2014.

Conquest attempts have also been steadily declining: In data dating back to World War I compiled by Dan Altman, the researcher, violent land disputes have fallen from about one per year to almost none — if small islands and uninhabited areas are excluded.

In a typical decade between 1850 and 1940, perhaps 1% of the world’s population saw their ruler change as a result of an invasion, according to Correlates of War data.

See also  The Ukraine-Russia war: Where does Russia take stolen grain from Ukraine?

But over the past 40 years, with the exception of Ukraine, less than 100,000 people (or 0.001%) have experienced the same thing, almost all in long-disputed territories, during the 2020 war between Armenia and Azerbaijan.

The economic benefits have diminished, while the costs have become too high – modern expectations of the state make it difficult to rule a group of people against its will – and international rules and institutions mean that other states are more likely to step in to prevent

Even if the destructive force of modern warfare does not destroy the productive potential of the region, economic activity, which was driven almost exclusively by land and natural resources, is now more dependent on human capital.

Workers are less likely to work in conflict areas or under the control of aggressors. If they can, they often leave. Security measures, which are often required to maintain control of territory, require traffic and trade restrictions, which can impair their development.

Globalization has also eroded incentives for conquest. The dramatic drop in shipping costs over the past century has allowed countries to look beyond their neighbors for a greater share of trade and resources. With lower tariffs and other barriers to trade between countries, it became futile to seize markets by force.

Western example of defeat in Afghanistan

Those trying to maintain their sovereignty over a foreign land face increasing challenges. America and its allies discovered this in their efforts to transform impoverished Afghanistan into a modern democracy after the 2001 invasion and overthrow of the Taliban regime.

Despite the occupiers’ enormous military advantages—such as air control—Taliban forces eventually prevailed, leading to a humiliating American withdrawal in 2021. The highly motivated insurgent fighters, often backed by a sympathetic civilian population, were far more prepared. of the conquerors.

Neighboring Pakistan, whose army and spies have long supported the Taliban, has complicated America’s efforts to impose order. Meanwhile, the enormous cost of military occupation in a remote and landlocked region of Asia has become difficult for American politicians to explain to their constituents.

In Ukraine, even the predominantly Russian-speaking parts of the east and south of the country are now fiercely hostile to Russia. In Odessa, a port city that holds a valuable place in Russian history and culture, Ukrainian flags now flutter on every street corner.

And the options for controlling the possessed, at least for conscientious conquerors—or the desire to appear as if they had one—are more limited than they used to be.

Slavery and divide-and-conquer tactics, such as those used by Britain to maintain order in the empire, are now viewed almost universally as morally bankrupt and barbaric (even if they remain far from being completely eradicated).

And genocide is even more brutal – so much so that third countries realize the responsibility and the right to protect the population from it, using military means if necessary.

Vladimir Putin has always been “blind” to these arguments. He doesn’t care much about other people’s interpretation of the past.

“People who have opinions about the history of our country may disagree with me,” he said in 2014. “But I think the Russian and Ukrainian peoples are practically one, no matter what others may say.” seized Crimea.

Perhaps comments like these should have alerted Western powers to his broader regional ambitions in Ukraine much earlier.
But now that they have awakened, they seem determined to uphold the rules that have prevented other nations from forcibly expanding their borders.

Western countries did not send their troops to fight in Ukraine. But they are supplying Ukraine with their latest conventional weapons, training its soldiers, funding its government, and trying to cripple Putin’s invasion with sanctions.

On September 21, in a speech to the United Nations General Assembly, US President Joe Biden said bluntly: “If nations can pursue their imperial ambitions without consequences, we are jeopardizing everything that this very person represents.”