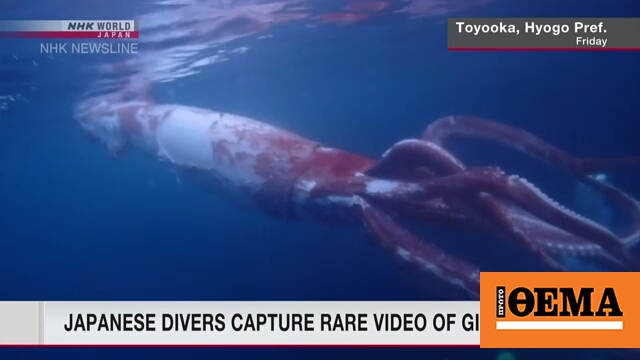 Two Japanese divers recently managed to capture rare photos of Giant squid Swimming 2.5 meters off the western coast of the Japanese archipelago, they described their experience as “exciting”.

the Yosuke Tanaka and his wife, Miki, diving instructors in Toyooka, Hyogo Prefecture, in the west JapanThey are alerted by a tackle seller, who has seen a giant squid near the surface of the sea in a bay, and sets out by boat to find it near a rocky shore.

“There was a huge squidTanaka narrated. “It didn’t have the agility of many fish and sea creatures,” he added. “His claws and flippers were moving very slowly.”

The diver noted that the squid appeared weak and its skin appeared to be peeling in places.

The squid’s size and large eyes were shocking, and Tanaka said seeing it made him imagine how powerful a squid could be to attack a whale.

“I could see his claws moving. I thought it would be dangerous for him to grab you and drag you away.” This creature, go on.

Giant squid are known to live near its shores Japan Sometimes some wash up on its shores, but it is very rare for one to see them swimming in the sea.

“It was exciting. I think a few things are rare from this view,” Tanaka said, adding, “I hear we don’t know much about this creature. I would be glad if this helps us learn more.

“I was surprised when more than 2,000 people came to wish me well”: Porras comments on the prank with the pig

See also  Are You The One Season 6: Updates on Couples who are still together