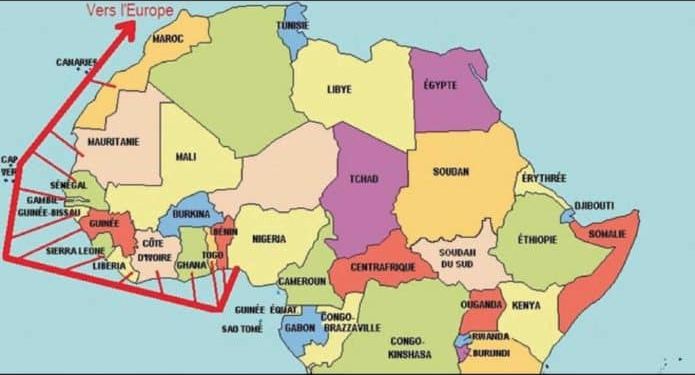 At a time when Algeria is trying to relaunch its old trans-Saharan gas pipeline project, A mirage that President Tebboune is still the only one who believes in, The Economic Community of West African States (ECOWAS) has chosen a gas pipeline between Nigeria and Morocco (GNM). A new failure of a project across the desert, as the difficulties facing the project multiplied. the details.

The giant gas pipeline project that should link Morocco and Nigeria across the Atlantic coast to supply gas to Europe is accelerating. This gigantic project has passed an important stage by receiving on Wednesday 1 June the first green light from Abuja, announced Timber Silva, Nigeria’s Minister of Petroleum, after many attempts to influence, especially from Algiers which is trying in vain to revive the massive infrastructure road “of the railway line” gas pipelines across the desert. It is clear that as part of the gas pipeline construction project with Morocco, Nigeria has given the green light to the state oil company NNPC to sign a memorandum of understanding with the West African regional organization ECOWAS, which includes 15 countries of which he is also a member. .

During a cabinet meeting in Abuja while making a presentation, Nigeria’s Petroleum Minister said that Morocco and Nigeria signed a joint project in 2016 to build a gas pipeline that will transport gas through fifteen countries in West Africa, and through Morocco to Spain and Europe. Requesting approval and deciding between the two projects initiated by Rabat and Algiers.

It should be noted that this project, which was first announced in December 2016, during the official visit of King Mohammed VI to Nigeria, moved very quickly in its infancy.

Already in May 2017, cooperation agreements were signed in Rabat to oblige the parties to sponsor a feasibility study (completed in July 2018) as well as a preliminary study of details (FEED) delivered in the first quarter of 2019. June 2018, agreements related to its construction in Rabat. In the pre-study phase, the transit countries and ECOWAS are required to sign agreements related to their construction but also to check the volume of gas available to Europe and start discussions with the operators of the Tortue field (gas resources) off Senegal and Mauritania (these two countries signed an agreement in December 2018 for joint operation of the Grand Tortue-Ahmeyim gas field) and communication with European customers. The various stakeholders of the project believe that it will boost regional industries, support the establishment of industrial centers, facilitate the development of the industrial, food processing and fertilizer sectors, as well as improve the competitiveness of exports among African countries. Therefore, it will allow West Africa to be self-sufficient in these areas.

Private players have also been involved so far, notably British companies such as Penspen, which were involved in the feasibility study and preliminary study of the details of the gas pipeline. ONHYM (National Office of Oil and Gas in Morocco) and state oil company NNPC also played a leading role in the design of the gas pipeline route, both offshore and onshore, and they selected Penspen and with them realized Phase 1 of the project with the Initial Study of Details (FEED). International development banks will also be contacted to obtain financing for the project, to support the sovereign funds of the two countries, namely Morocco Ithmaar Capital and Nigeria, the Nigerian Sovereign Investment Authority (NSIA).

Last December, the Islamic Development Bank (IDB), which mobilized $15.4 million for the Kingdom to conduct the design study and approved $29.7 million in financing for Nigeria, launched a Call for Expression of Interest (AMI) for the financial audit of the project’s pre-project studies for the inter-gas pipeline construction project. Nigeria and Morocco. Thus, the Islamic Development Bank must bear approximately 50% of the total cost of the study, which costs $90.1 million, with results to be delivered in 2023.

Also more recently, last April, Nadia Fattah, Minister of Economy and Finance, exchanged correspondence with Abdelhamid Al Khalifa, Managing Director of the OPEC Fund and Amina Benkhadra, CEO of ONHYM, to sign legal documents related to financing, in the amount of $14.3 million awarded by the Fund. OPEC to the National Office of Public Health in Yemen as part of its contribution to the financing of the second phase of the preliminary study – Detailed Project (FEED).

It stands to reason today that Nigeria, the world’s fifth largest gas exporter and the largest in Africa, and the Economic Community of West African States, will have a leadership role in negotiating agreements and overseeing the construction of a gas pipeline as far as countries crossed. With the gas pipeline as part of it, they have chosen the Nigeria-Morocco gas pipeline project which has undeniable advantages compared to the Nigeria-Algeria project which has only the geographical factor with a length of 4.128 km compared to 5660 km. from GMN.

It is noteworthy that the Trans-Saharan gas pipeline aims to transport gas from the Niger Delta to Algeria via Niger and possibly Mali. Multiple security challenges must be overcome along the course of this project that has been discussed since the 1990s. Niger Delta, it seems difficult to implement this project in the short term. It will have to cross unsafe areas, from the Niger Delta where hydrocarbon extraction facilities are facing chronic sabotage, through northern Niger where Tuareg rebels and terrorist organizations are prevalent, before setting off. Access to the Algerian Sahara known as a haven for criminality and criminality. terrorist groups.

In addition to the security challenge, there is also the funding problem. The project cost and funding sources are not yet known. The result of the races: no more doubt about the Nigerian position which thus joins the position of the Economic Community of West African States, one of the main proponents of the nationalist national movement. It should be noted that the kingdom, now firmly rooted in this part of the continent, is the first African investor in West Africa and the second on the continent.

Nigeria, a member of the Organization of the Petroleum Exporting Countries (OPEC), has vast gas reserves, the first in Africa and the seventh in the world. Presented as conducive to the economic integration of West Africa, the GNM gas pipeline project should allow West African countries to take advantage of Nigerian gas to overcome energy problems, particularly in electricity production, which is a real obstacle to their industrial development.

Today, despite numerous attempts to revive the massive trans-Saharan gas pipeline infrastructure during his trip to Niger on February 15, Algeria’s Energy Minister Mohamed Arkab, in order to approve the implementation of a roadmap for the Trans-Saharan Gas Pipeline Project, is now the bet: Nigeria I decided in favor of the Moroccan way.

The Nigerian-Moroccan gas pipeline should also benefit from the international situation that has characterized the Russian-Ukrainian conflict, which is causing gas reserves in Africa to attract more and more attention, especially from the European Union, which is trying to free itself from the Russian-Ukrainian conflict. Dependence on Russian gas. Moreover, the recent discoveries of offshore gas deposits along the GMN route, in particular off the coast of Côte d’Ivoire and Ghana, between Senegal and Mauritania and in Moroccan territorial waters, should reassure, on the one hand, the European. On the ability of GMN to meet its gas needs, and on the other hand, potential investors on the economic feasibility of the project.