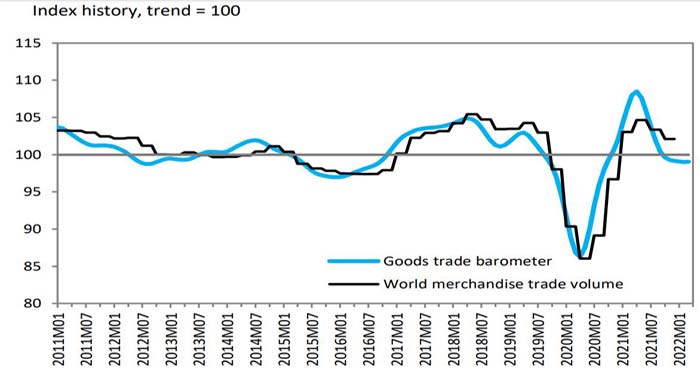 The pace of growth in merchandise trade has remained slow globally, the World Trade Organization said in a new report recently.

The international institution responsible for defining the rules that govern trade in goods, services and agricultural commodities estimated: “The conflict in Ukraine and recent restrictions in China linked to the pandemic appear to slow global trade in goods in the first half of 2022.” and industrial and intellectual property between countries.

According to the latest data from the World Trade Organization’s Merchandise Trade Barometer, a composite leading indicator that provides real-time information on how merchandise trade is changing relative to recent trends, “the current value of 99.0 is slightly lower than the benchmark (100), which consists of real-time leading indicators. This indicates that the pace of growth in trade in goods remains slow,” the World Trade Organization noted in its report.

After analyzing the data collected by the organization, it becomes clear that “the recent forecasts are less optimistic than those shown by the barometer in February, which indicates that trade may be on the cusp of a shift, with stronger growth expected in the near future.”

As the organization explained in its report, there is every reason to believe that “the expected recovery may have been cut short by the conflict in Ukraine, which began in late February and led to sharp increases in food and energy prices, which tend to lower real incomes and dampen economic growth.”

The World Trade Organization estimated another reason for this situation, which is that “China’s imposition of significant containment measures to combat a new outbreak of the Covid-19 virus has further disrupted trade and production.”

However, the WTO emphasized in its report that the rally in the barometer could have been above trend if some of the fundamental data of its constituents in March and April had not declined.

In this regard, the organization states that “the indicators that make up the barometer are smoothed to reduce the impact of outliers, but this can mask the sudden changes in recent months.”

In this table, she said, only container shipping appears to remain well below trend (95.0).

It is important to note that the unformatted data for export orders and air freight moved from the higher trend in one period to the lower trend in the next. For the organization, this indicates a marked decline.

However, the WTO warns: “If the Ukraine crisis and restrictions in China continue, their impact can be seen more clearly in the following press release.”

Let’s remember that last April, the World Trade Organization predicted that the volume of world trade in goods will grow by 3% in 2022, while it forecast a growth of 4.7% last October.

To find out, it turns out that the current value of the barometer is generally in line with the April forecast, while “the forecast is currently less certain and should be interpreted with caution,” the organization noted.