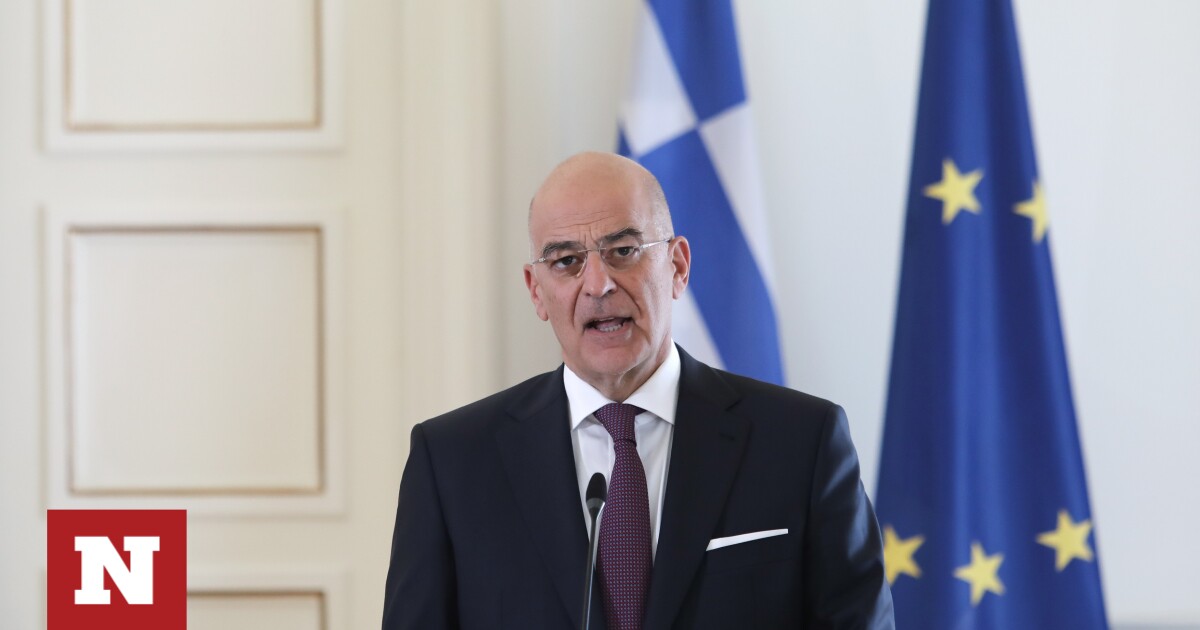 Minister of Foreign Affairs , Nikos DendiasHe sent a new resounding message to Turkey by making clear that Greece’s national sovereignty and territorial integrity cannot be contested. The intent of the state to proceed with the expansion of its territorial waters becomes clear when it is considered in the national interest and appropriate.


Great interview withSunday Free PressThe Secretary of State admitted, Nikos Dendias. In it, among other things, he stated that there can be no dialogue between Greece and Turkey while Ankara indulges in “bullies” and “sluts”. At the same time, he noted all the moves of Greek diplomacy in the past three years, but also the country’s intentions in the near future on a series of important issues.

«Let me add that this is not just an attempt to intimidate Greek society and the government, but in fact an attempt to shape and impose a new model of bilateral and regional relations on the Turkish side. However, this model is not compatible with any concept of good neighborliness and respect for the basic principles of international lawAt first, Nikos Dendias said about whether there was an attempt to intimidate the Greek community before turkey.

“aIn the face of these conditions of heightened threat, our country has quietly and resolutely chosen to oppose documented arguments based on international law and the international law of the sea. I repeat that the national sovereignty and territorial integrity of our country are not subject to controversy and they are not open to the slightest question, Greece protects itself diplomatically and defensively against the constant method of reversing the reality that the Turkish side is trying.“, he added.

As the head of Greek diplomacy noted: “I would also like to stress that our partners and allies consistently show their full support for the Greek positions. In particular, in the context of the European Union, solidarity with our country against Turkish aggression is reflected. In the European Union but also with other countries. They get recognition for Greek positions, the latest example being Serbia whose new Foreign Minister Ivica Dayer visited Greece on his first official visit abroad. The importance of Serbia’s support is not only that it is a traditional friend of Greece. Yugoslavia signed the Treaty of Lausanne, the Montreux Convention, and the Treaty of Paris».

About whether there is concern about More escalation as severe as turkey Heading to the elections, Mr. Dendias commented: “It is realistic to expect that there may be potential for constructive and meaningful dialogue. The provocative behavior of our neighboring country like this is manifested both at the rhetorical level and through concrete actions. I am afraid it is not a contemporary phenomenon that can be explained simply by the electoral needs of the Turkish leadership».

See also  A barrage of explosions in Istanbul | in. gr

Regarding the possibility that there is a dialogue With Turkey, Mr. Dendias was clear. “Constructive dialogue can only take place on the basis of equality on the basis of international law. Not with the logic of force, personal insults, nor questioning sovereignty and violating sovereign rights. Not with bullies and bullies, to use two words of Turkish origin».

In a question about whether Libya It may be the natural interlocutor of Greece, the minister replied that Greece always looks forward to a constructive dialogue with third countries on the basis of international law and especially the international law of the sea, especially when it comes to a country in our wider region.

«After the two agreements we signed in 2020 with Egypt and Italy respectively to demarcate the EEZ borders, Libya is now between two completely legal demarcations. We hope that all parties in Libya understand that compliance with the international law of the sea is the only condition for the delimitation of the exclusive economic zone. And that the Libyan government that will emerge from the elections will discuss with us in order to complete this demarcation legally.He commented and added:

“with meIt is about a demarcation that serves the interests of our two countries and further promotes the consolidation of stability in the Mediterranean because as we have already emphasized, Greece has a common strategic objective for Libya with many allies and partners inside and outside the European Union. This goal concerns a peaceful country that will serve as a pole of stability and prosperity for the entire eastern Mediterranean».

But Mr. Dendias explained that “Of course, as you understand, in order to conduct the relevant negotiations with the Libyan side, the inviolable condition is that there is a Libyan government that can bind the country internationally, which is not the case today. For this to happen, on the one hand, Libya must go through democratic processes to elect a new government, and on the other hand, open the way for the removal of foreign forces and mercenaries present on Libyan soil, taking advantage of civil conflicts. from previous years.».

The next question for Mr. Dendias concerns the interior of the country and the resulting political exacerbation watching. The Minister of Foreign Affairs replied:What worries me and what I avoid is the formation of a toxic political climate in all areas that will affect the areas of foreign policy and national defense at a particularly critical juncture. It is true that until now, despite individual differences, we have been able to ensure that the political confrontation in certain sectors does not go beyond borders. I hope that in light of a year in which elections are held anyway, primary wisdom will prevail.».

In all things related to the developments in Ukraine, On his last visit to Kyiv, Mr. Dendias replied that “I would say that any assessment under the current circumstances is very risky. It is very likely that Russia will continue the war in Ukraine in the coming months using winter as its own weapon against the West due to high energy prices. Not to escalate its actions at the diplomatic and military levels, and not to resort to other extremist solutions».

While he added that:My visit to Kyiv was intended to show that while international law and its fundamental principles and values ​​are brutally trampled on, Greece insists on its unwavering application as a counterweight to any revisionist and expansionist tendencies. It should be clear that the European Union and the West in general must continue their unwavering support for the independence, sovereignty and territorial integrity of Ukraine within its internationally recognized borders as well as all countries of the world facing similar threats. My visit to Kyiv also aimed to highlight a clear message about the immediate threats to Greece from its largest neighbor to the East, and that the West should never underestimate this threat.».

Then the head of the Greek diplomacy pointed out that her problem energy crisis It exists and despite the government’s response, it does exist delay From European Union In implementing measures to address problems. “The rise of populism, like the far right, is certainly a wake-up call for the whole of Europe and a danger in the medium term to its cohesion. But I hope that in our country at least because the memories of the outbreak of these phenomena in the last decade and the well-known findings from the arenas of the furious are still recent, we will not have a repetition of this particular scenario. Of course, there is no need for complacency, for its part, the Greek government should show an interest in social cohesion and the most economically vulnerable of our citizens, as it already does.he commented.

Finally, Mr. Dendias made one the account From his actions, after a related question, in Ministry of Foreign Affairs. He specifically said:Certainly in my three and a half years at the State Department there was no shortage of challenges called in to meet challenges mainly on the part of neighboring Turkey.

In a broader context, pivotal events such as the Russian invasion of Ukraine are reordering the world order, which affects our immediate neighbors as well and requires vigilance and new active planning on our part.

However, with a series of moves we’ve made over the past three years, we’ve formed a good foundation to face any challenges with confidence in the years to come.

A base built on the systematic expansion of alliances and partnerships in all geographical areas of the planet, I will only mention the strategic cooperation agreements signed during my days with the United States of America, France and the United Arab Emirates, with the latter also containing defense assistance clause of the agreements we signed with Italy and Egypt to demarcate the borders of the exclusive economic zone on The basis of international law, as well as the agreement with Albania to refer the issue of demarcation between us to the Hague Court

Upgrading relations and close coordination on many levels with our wider neighbors Cyprus, Egypt and Israel through bilateral or multilateral schemes as well as with opening up to other countries in the Arab world in the Gulf and Maghreb where Greece has established traditional relations gradually has faded

But also open channels of communication and cooperation with a number of countries in Africa and Asia. General Assembly in 2035

At this point, I would like to emphasize the expansion of our territorial waters in the Ionian region from 6 to 12 nautical miles, which, for the first time since 1947, has expanded the area of ​​national sovereignty by more than 13,000 square kilometres. The United Nations Convention on the Law of the Sea to expand our waters wherever and whenever we consider our national interests to serve

Finally, let me make one last point. In addition to what has been accomplished in foreign policy in the narrow sense, I would also like to note the changes that we encourage in the structure and services of the Ministry of Foreign Affairs, with the aim of emerging as a modern mechanism capable of meeting the challenges arising in an ever-changing landscape of international relations so as to serve to project the country’s positions abroad with confidence».