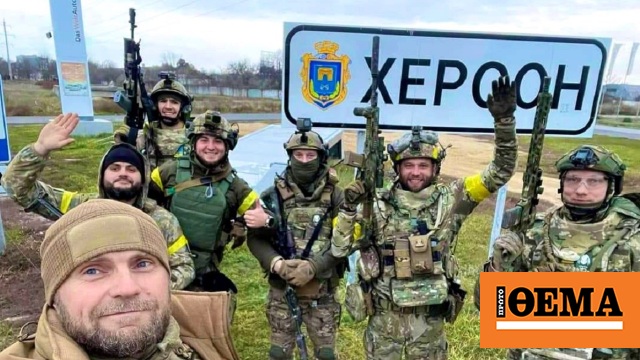 In the wake of the Ukrainian forces regaining control of Kherson, it is time to de-mine, repair infrastructure, and record and document the “crimes” attributed to Moscow in the major southern city, the loss of which represents a major setback for the Kremlin.

for Kyiv, The West is on its way to a “common victory” over Russia after the restoration of Kherson. The Ukrainian national anthem was played there yesterday after the withdrawal of Russian troops.

The KhersonMoscow, annexed by Moscow in late September, was the first major city to fall after the Russian invasion that began in late February. In the photos released by the Ukrainian armed forces, Ukrainians dance in circles around the fire to the beat “Chervona Kalyna”, patriotic song. Outside the village of Chersona pravinn, Returning residents embrace their neighbors. Some cannot hold back their tears.

“Finally victory!” Ji saidforeign agency Svetlana Galak. “Thank God, we are finally free and now everything will be back in place,” said this 43-year-old woman who lost her eldest son in battle. “We are Ukraine,” said her husband Vikor, 44.

“We are all very happy,” he said. Ukrainian President Volodymyr ZelenskyAnd the who also reported extensive damage in the area.

The Ukrainian president stressed that “before leaving Kherson, the invaders destroyed all vital infrastructure – communications, water supply, heating and electricity,” adding that they were neutralized. 2000 explosive devices.

According to Zelensky, the Ukrainian Armed Forces regained control of approximately 60 positions in Kherson Province.

Incoming and outgoing artillery fire continued around Kherson International Airport, and police said they were setting up checkpoints in and around the city and checking mines left by the Russians.

Historic scenes of rejoicing in Kherson after the city’s liberation from Russian occupation. It’s surprising to think that just weeks ago, the Kremlin tried to convince the world that these people wanted to join Russia pic.twitter.com/Q6k9LSP9Ht

The mayor of Kherson said the humanitarian situation was “serious” due to the lack of water, medicine and bread in the city.

After eight months of occupation by Russian troops, the television programs of Ukrainian State Television returned in Kherson. The province’s power supplier announced that it was working to restore electricity supply.

The national police chief said about 200 police officers had been deployed in Kherson to set up roadblocks and record and document “crimes of the Russian occupiers”. Igor Klimenko in his statement.

He alerted the city’s residents to the presence of explosive devices left by the Russian forces, calling on them to “move with caution.” According to Klimenko, a police officer was injured during a demining operation in a building in Kherson.

A woman and two children were injured in an explosion near their car in the village My love, In the province, according to the police, who also reported Russian bombing of the area Pereslav.

‘We are twenty years younger’

Villagers carrying flowers waited on the road to the southern city of Kherson to greet and kiss Ukrainian soldiers today as Ukrainian troops poured in to secure control of the right bank of the Dnieper River after a Russian withdrawal.

In the small village of Klapaya, about 10 kilometers from the center of Kherson, 66-year-old Natalia Borkhonok and 61-year-old Valentina Bokhailova stood on the side of the road with bouquets of freshly cut flowers, smiling and waving at passing vehicles carrying Ukrainian soldiers. .

“We’ve become 20 years younger in the past two days,” Bokhailova said, shortly before a Ukrainian soldier jumped out of a pickup truck to embrace the couple.

Outside the village of Chornobayvka, near Kherson, a Reuters reporter saw incoming Russian fire resembling cluster munitions at the nearby airport. This was followed by a fire shortly after from the Ukrainian side.

The road to Kherson from Mycolife It was surrounded by fields containing miles of abandoned Russian trenches. The damaged T72 tank was placed with its turret upside down.

Trash, blankets and camouflage nets are scattered over the deserted trenches. An irrigation trench was littered with discarded Russian paraphernalia and anti-tank mines were seen on the roadside.

In the village clabayaFor most of the past nine months, Borkonok said, the village had been occupied by Ukrainian pro-Russian forces from a Russian-controlled province. Donetsk “Who said they wouldn’t hurt us and we should stay at home?”

See also  The absence of Colonel Asimi Guetta, the main reason for the continuation of sanctions against Mali? • Malejet

But for two weeks, Russian soldiers occupied Klapaja and told the villagers they were there to look for “Nazis, Banderis (known as Ukrainian nationalists) and American pulabes,” he said, answering them: “If you want to find them, look elsewhere, and go home.” .

He also warned the Russian soldiers that: “If we find that you are hiding any Ukrainian soldiers, we will flatten your house and village,” she continued. He said the attackers also looted homes whose residents had left.

In the neighboring village of Kiselivka, a group of teenagers stood in a dusty corner with a sign made from a closet door on which they painted the painting. “Khersona” An arrow shows a detour around a damaged bridge on the main highway from Mykulevi.

“We are here because we wanted to help in some way,” said Artem, 17.

“They didn’t fire any shots,” said Hihori Kulwaka, 54, who was riding a motorcycle. “They just left.”

“in the right way”

“Only together can we win and expel Russia from Ukraine. We are on the right track,” said the Ukrainian Foreign Minister today. Dmitro Koleba During a meeting with US Secretary of State Anthony Blinken on the sidelines of the Association of Southeast Asian Nations (ASEAN) summit in Phnom Penh.

“Our victory will be our common victory,” he added.

The US National Security Adviser said: “It seems that the Ukrainians have just achieved a remarkable victory: the only regional capital captured by Russia in this war has returned to the Ukrainian flag, which is very impressive.” Jake Sullivan.

“Finally my city is free”

This withdrawal of Russian forces is the third in size since the invasion began on February 24. Russia was forced to abandon its occupation of Kiev in the spring in the face of fierce Ukrainian resistance, before being expelled from almost all of the territory of the Kharkiv (northeastern) province in September.

Friday night, in the emblematic square Field In Kyiv, Kherson residents who had been refugees for months in the capital celebrated the news with enthusiasm.

“Finally, my free city, the city in which I was born, where I have lived my whole life,” said Nastya Stebinska, with tears in her eyes, the colors of the Ukrainian flag painted on her cheeks. Said the 17-year-old high school student, who was “in a state of shock.”

Earlier on Friday, the Russian Defense Ministry announced that it had completed the “redeployment” of its units from the West Bank, on which Kherson is located, to the eastern bank of the Dnieper River, claiming that it had suffered no casualties and had not made any casualties. Even military equipment.

According to Moscow, “more than 30 thousand” Russian soldiers and “approximately 5,000 units of weapons and military vehicles” were withdrawn from the western bank of the Dnieper River.

However, this military withdrawal has all the elements of shock for Moscow and for the Russian president himself. When he announced at the end of September the annexation of Ukrainian regions Donetsk, Luhansk, Kherson and ZaporizhiaThe Russian President Vladimir Putin He said they would stay in Russia forever.

The Russian president spoke today with his Iranian counterpart Ebrahim Raisi, at a time when Tehran appears to be a key ally of Moscow in its invasion of Ukraine.

The Kremlin said the two leaders “emphasized the intensification of cooperation in the political, economic and trade fields.”

For his part, the former president of Russia Dmitry Medvedev He once again threatened to use nuclear weapons.

“For reasons that are obvious to all sane people, Russia has not yet used the full arsenal of possible means of destruction,” he wrote on Telegram, noting that “everything has time.”

Tragedy at the Dallas Air Show: Two planes collide in the air – watch the video

War in Ukraine: Maps of Russian withdrawal – Zelensky declared “We took another 60 settlements”