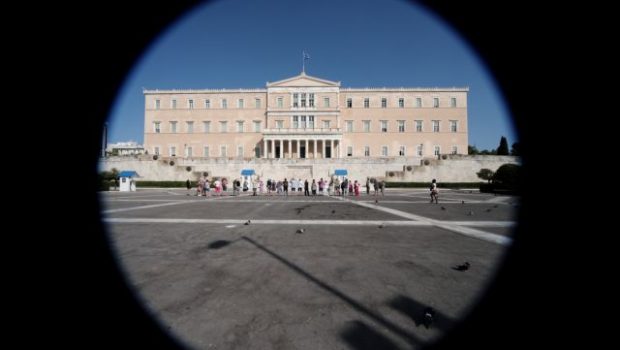 She is not independent

The dominant conclusion is the result of the analysis of its components Research (This happened in the third week of last November) Citizens show broad recognition of the constitution, although they consider both the country’s charter and laws to be overridden by the dictates of politics.

70% feel that judicial power is not independent from economic and communication power centers, while 71% of mandates feel that media freedom is not protected or its protection is linked to censorship and interference. .

In fact, an even higher percentage of citizens, reaching a total of 74%, believe that there were limited (32%) to extensive violations of the Constitution during the pandemic (42%).

It should be underlined here the fact that only 14% of the responses given by citizens regarding surveillances are done “on rare occasions for national security issues”.

70% of citizens believe that monitoring Androlakis violates the Constitution, while insecurity dominates the question of how secure citizens feel in protecting the privacy of their communications. 46% of citizens answer “no” and 22% “a little” to this question.

Vote and Security of the State

In addition, 81% of citizens respond that their vote will be affected “a lot” (62%) and “a little” (19%), in some cases if the prime minister or ministers turn out to be unconstitutional. Only 18% did not base their vote on unconstitutionality.

However, at the same time, 61% tend not to recognize violations of the Constitution for reasons of state security. However, the trend is the opposite, where a high percentage, 38%, say “yes” and “probably yes”, that “security of the state” is above the Constitution.

An interesting finding is that on the question about the procedure followed to amend the constitution, 34% are in favor of a Constituent Assembly so that the constitution can be changed directly by the people. This may be related to a widespread opinion recorded at 64% that the current rulers do not respect and violate the constitution and laws.

“Greek society trusts the constitution, but doubts whether it is truly implemented by rulers and the judiciary, expressing the same dissatisfaction or disillusionment found in surveys of the political system and institutions,” said the head of the European Constitutional Center. Law, Xenofontas Kontiadis, presented the research yesterday at an event held with particular success at the Athens Bar Association.

Stick to the app

Mr. Kondiatis pointed out. This percentage is higher among the elderly, more affluent and highly educated, while it decreases among younger people and those who identify themselves as left-wing.

The coordinator of the event, Alcmani Fotiato, gave feedback to the three invited members of parliament who, among others, commented on the following:

Olga Kefalogiani: “Beyond trust in the Constitution, as reflected in the survey, it also follows that we must be committed to its implementation. […] If the executive does not respect the constitution, it effectively undermines its democratic legitimacy.

The companies did not respond

Efi Ahtsioglou: “The constitutional system is widely accepted by citizens, [αλλά…] They feel that the institutions charged with protecting the Constitution are not doing their job. That, I think, is a very loud bell ringing with this research.”

Giorgos Kaminis: “Despite the divisions that exist now, and despite the great polarization that prevailed for much of the post-colonial period, we must not forget that the Constitution remains the main institutional value, implemented by almost all political parties.”

In more detail, the survey question is divided into categories:

Question: How proud are you of Greece’s constitution?

Question: In our country, do you think judiciary is independent from respective government, economic and communication power centers? 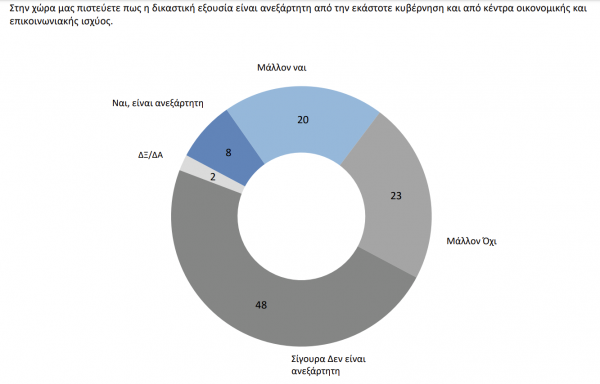 Question: Would you say that the rulers respect and follow the constitution and laws in our country? 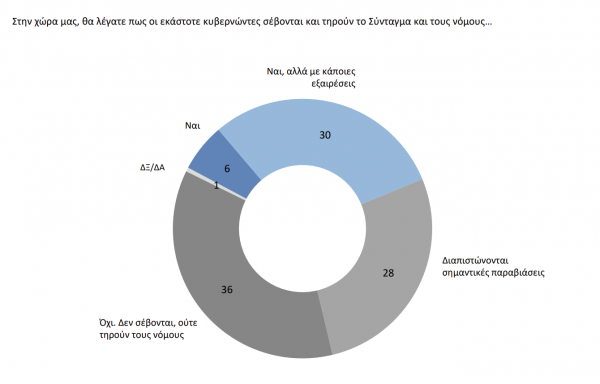 Constitution in times of crisis

Question: In your opinion, to what extent has our constitution contributed to democratic stability since 1975 till date…? 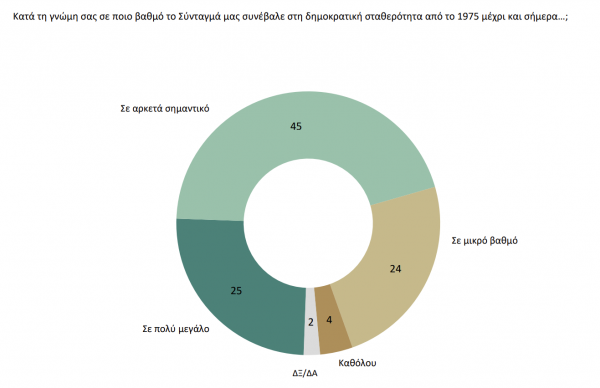 Question: During financial crisis does our constitution say… 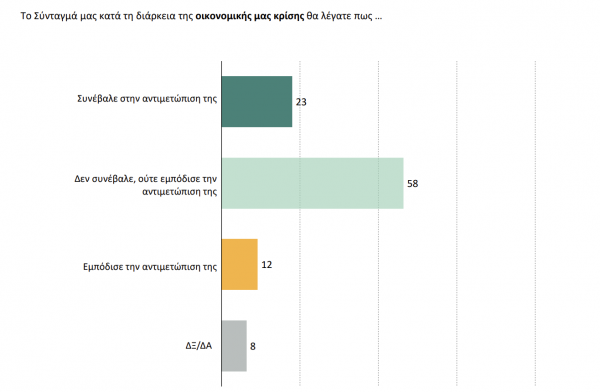 Question: In your estimation during the pandemic… 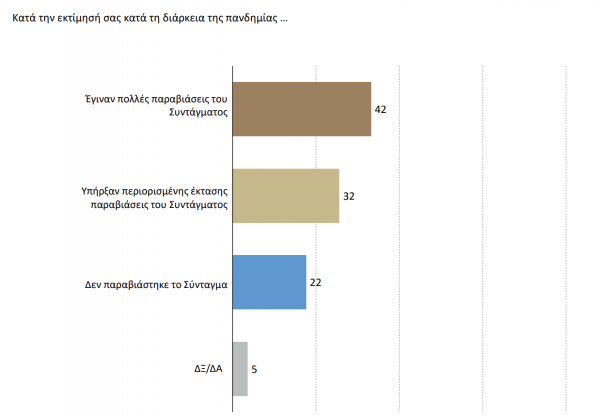 Question: Do you generally believe that the Constitution can be violated in some cases for the protection of the state? 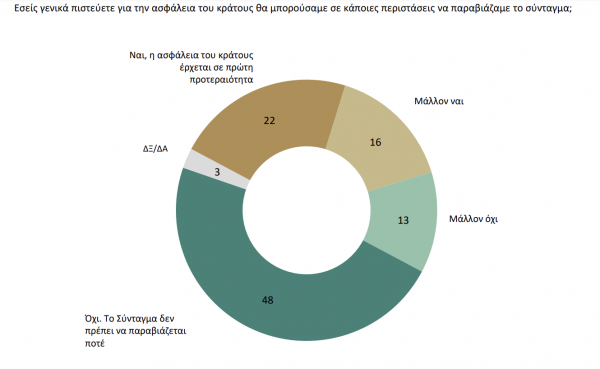 Question: If the Prime Minister or ministers are found to have violated the constitution in some cases, will that affect your vote in the elections? 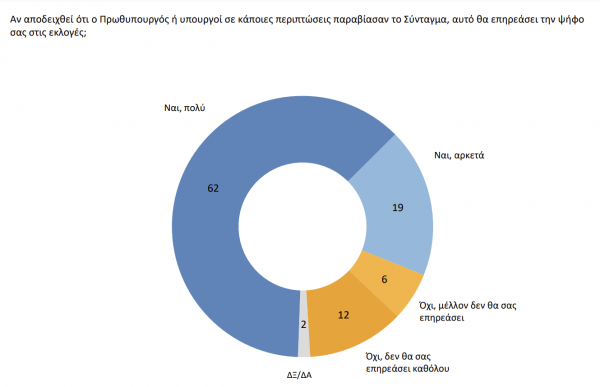 See also  "We are ready to defend our country"

Answer: No, media freedom is not effectively protected 37%, yes but with cases of interference and censorship 34%, yes in isolated cases 15%, yes 14% 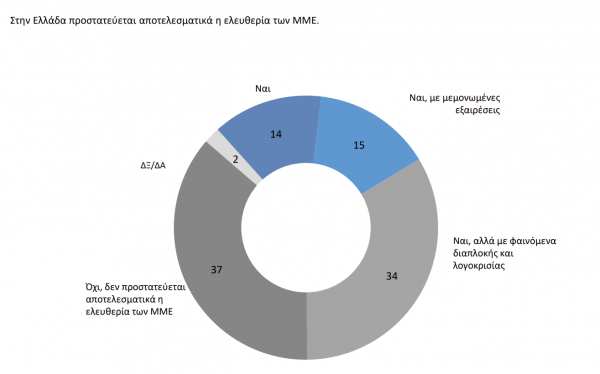 Question: The Constitution lays down the basic rules for government and rights, so it is very difficult to amend laws. The constitutional reform process requires a proposal to be made by parliament to change the constitution and decided by the next parliament after elections with an increased majority. Do you think that: 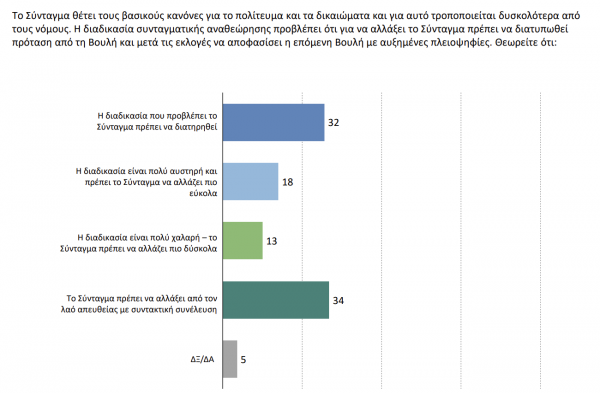 Question: How important is the issue of monitoring political figures and journalists through the EYP to you personally? 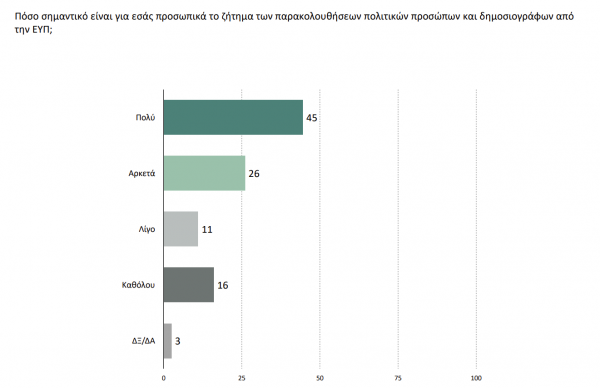 Question: In your opinion, did EYP’s surveillance of Nikos Androlakis and journalists violate our country’s constitution…? 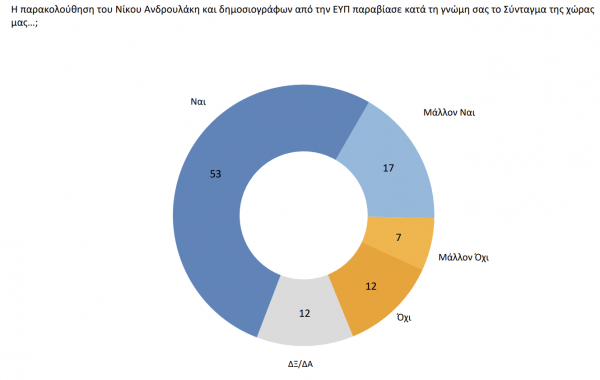 Question: How secure do you personally feel about the security of your personal communications? 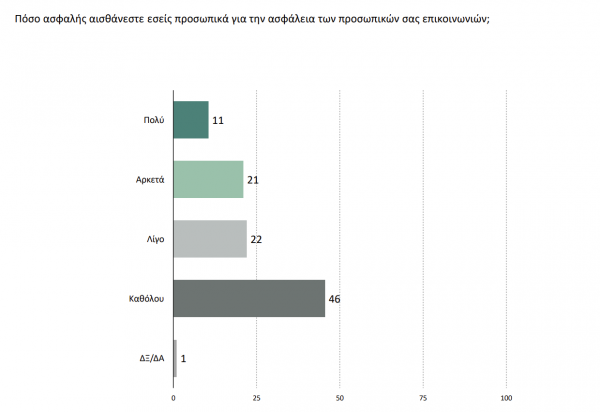 Question: Do you think the surveillance of journalists and political figures by EYP is something…

Answer: 14% for national security issues in rare cases, 60% regularly by all governments for party exploitation, 21% by large mainly in recent years by New Democratic government, DX/DA 7% 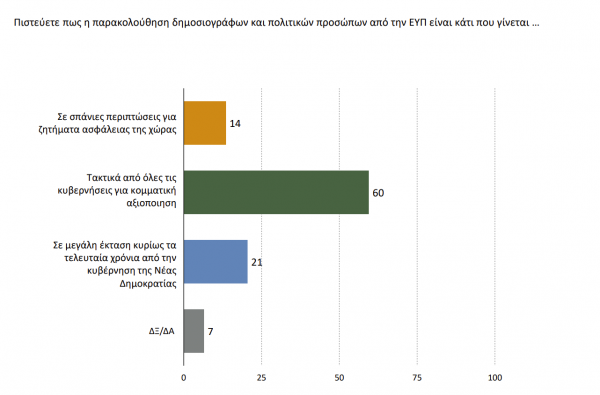