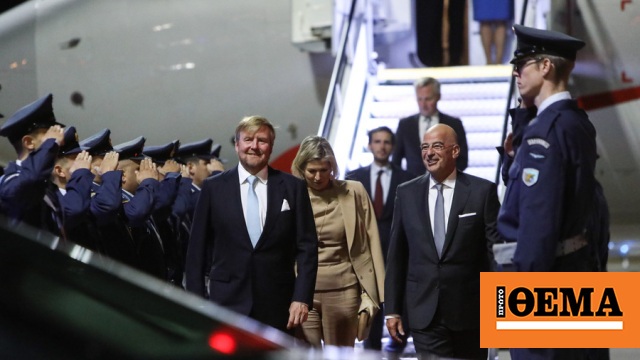 Foreign Minister Nicos Dentias King Willem-Alexander and Queen Máxima of the Netherlands, who will visit Greece until November 2, were welcomed at the “Eleftherios Venizelos” airport in Athens on Sunday evening, following an invitation from the President of the Republic Katerina Sakellaropoulou.

The royal couple of the Netherlands in Athens will lay a wreath at the Monument to the Unknown Soldier on Monday 31 October and then proceed to the Presidential Palace at 09:35, where an official reception and award ceremony will take place.

Subsequently, at 09:45 President Katerina Sakellaropoulou and Pavlos Kotsonis will have a private meeting with King Willem-Alexander and Queen Maxima of the Netherlands.

Later, at 10:30, the royal couple will meet with the Ombudsman of Greece and the Netherlands at the Dutch Institute in Athens, and at 13:30 they will visit the archaeological site of the Acropolis.

At 15:00 they will meet the Mayor of Athens, Kostas Bagoyannis, at Technopolis, followed by a reception for the Dutch community.

In the evening, at 20:00, the President Mr Katerina Sakellaropoulou A formal dinner will be held at the Presidential Palace in honor of the King and Queen of the Netherlands.

The second day of the official visit will include the participation of the King and Queen of the Netherlands at 09:35 with the President of the Republic Katarina Sakellaropoulou in a round table discussion on violence against women in the front hall of the National Library. of Greece, at the center of the Stavros Niarchos Cultural Foundation.

Immediately, at 11:00, they will attend the 14th Innovation and Startup Entrepreneurship Competition “The Skies” at the Lighthouse of the Cultural Center of the Stavros Niarchos Foundation.

At 12:25 pm the royal couple of the Netherlands will visit the “Elpida” pediatric oncology unit and at 3:00 pm the school unit and accommodation facilities for minors.

On Tuesday evening, at 20:00, the Mass of the King and Queen of the Netherlands will be held in the concert hall in honor of the President Katerina Sakellaropoulou.

On Wednesday, November 2, King Willem-Alexander and Queen Maxima of the Netherlands travel from Athens to Thessaloniki to continue and conclude their official visit to our country.

To me he is dead, “the tattooed rapist” – says Manhunt’s mother in Albania

Tragedy in Seoul: Grief and Unanswered Questions for the 154 Dead