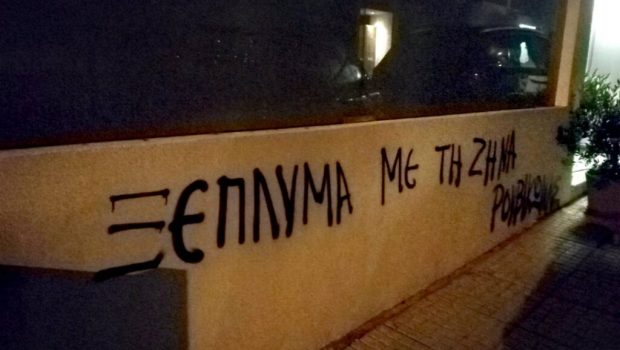 The feminist field focuses on the way “Truths with Gina” dealt with a serious case of rape and pimping in Iliopoli. Rubicon In a statement, after the intervention at his home, he wrote slogans on the wall.

“Washing with Zena” is the motto he wrote on the mantra of the house of Koutchelinis In Ekali.

In an announcement titled “Truths with Gina,” Rouvikonas says that at the end of the trial of the Iliopoli pimping case, the program “Truths with Gina” gave the convicts a nationwide platform. The police-davator is free to “break his silence.” He did not fail to publicly threaten that he knew who was in court with the woman, by their names.

In the same report, the report continues, “A person posing as the 19-year-old’s ‘close friend’ is given a speech where she denies that the 19-year-old could have lied for so long, about all she has been through. This “friend” of the condemned man Sister. In fact, she pressures the 19-year-old to drop the charges. And Gina plans her fraudulent report, which draws out the rape cop and drags out the victims. A rapist, pimp gives a public talk on a lunchtime show.”

Ruvikonas mentions the case of Lignatis, the case of Topaludi, but also the massacre of Eleni’s female slaves at Rhodes.

“This is not the first time that a certain person is concerned. With an attempt to wash the child rapist Lignadis, presenting a statement – a hagiography on his face in the moving occasion, as described, he staged inside the prison. Previously “How do you know that they cleaned your daughter?” in the Topaloudis family. In Rhodes After Eleni’s femicide, against the backdrop of a pathetic report that humiliated the victim, it caused backlash and ESR was forced to suspend broadcasting for good and temporarily. At the same time, in every case of femicide, abuse, rape: “pathological jealousy is a weapon in the hand of the criminal, romantic tragedy, emotional crime, Jealousy overcame him,” etc. says Rubiconas characteristically.

“Gina and her colleagues, through her show, play the role of advocate for the rapist, the abuser, the pimp. A concerted effort to divert attention away from the organized circuits of human exploitation and talk about individual incidents and a common conflict between the two parties. However, on the one hand, the police officers, “There are politicians, officials of the state apparatus and important citizens including friends and relatives. There is no attempt at whitewashing, our place is next to the victims, no one/no one is alone,” concludes the statement signed by the Rubicon Feminist Department.