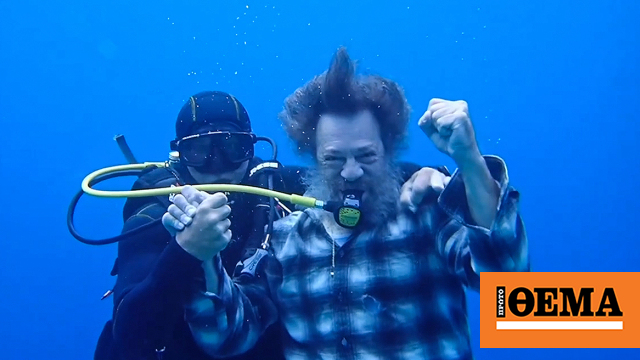 The “Musical band leader»By Christoforos Papakaliatis, this year he managed to win the hearts of the Greek public and a place on his popular platform Netflixas it is expected to premiere in Greece and Cyprus on December 19, 2022 and will be introduced worldwide for the first time in early 2023.

Christophoros Papakaliatis often publishes in Instagram, Stills and video clips from filming the series and preparing the actors. With a video, he revealed how the scene was filmed, in which the body of “Charalambos”, who embodied it, was filmed. Yannis Tsurtykisin the sea.

Even the creator and director of the series indicated in a commentary he posted that the actor stayed under the water for more than 40 minutes with divers providing him with oxygen until the scene was filmed.

“Shooting in the cold.. For the needs of this shoot, Yannis Tsortikis stayed under water for more than 40 minutes with divers supplying him with oxygen until the scene was filmed. At the same time in school with the Mikis Theodorakis Symphony Orchestra, to film one of the coldest moments but also my most Favorite in the series».

The role of Yannis Tsurtykis

The famous actor plays Charalambos, Maria’s husband and Spyros’ father. He is very uneducated and cruel. When he drinks, he becomes violent and abusive to his wife and son. Charalambos is the kind of person who can go to extremes because he believes the only way to enforce the law is through violence. He does not like music and does not want his son and wife to have anything to do with the festival and Orestes.

A few days ago, Yannis Tsortekis gave an interview on “MEGA Good Morning” and talked about his role.

The actor spoke about the love people showed him in ‘The Maestro’ and the doubts he had about playing Charalambos. “We get people’s response to the maestro and it’s great compared to the negative character I’m playing. The suspense is high for this very negative role. The same thing happened when I read the script written by Christophoros Papakaliatis, it caused me physical symptoms. I was so shocked that I said ‘I don’t know what if i can do it” “ Reveal the actor.

The character he plays: “People are literally angry at Dory and that’s a huge success. If this scene wasn’t so rude and brutal, then this scene wouldn’t have occupied society as public opinion. The whole story of this man and this family is a story of violence… All scenes are extreme domestic violence, every scene had a serious degree to it.” It’s very psychologically difficult to get this effect.” added:

“I was afraid of myself. I never saw myself on the set, because I don’t know what picture I’d get. When I watched the episode I felt sad for him, because I couldn’t see myself in this guy even for a moment. When those shots were taken, there was a deathly silence in me.” place, which had to do with disgust at what they were witnessing at that moment.”

The ‘darkest hour’ of the war in Ukraine: Are we heading for an end or an escalation?

Salt Bay: Nusrat responded with a “golden” steak to criticism of the €161,000 bill