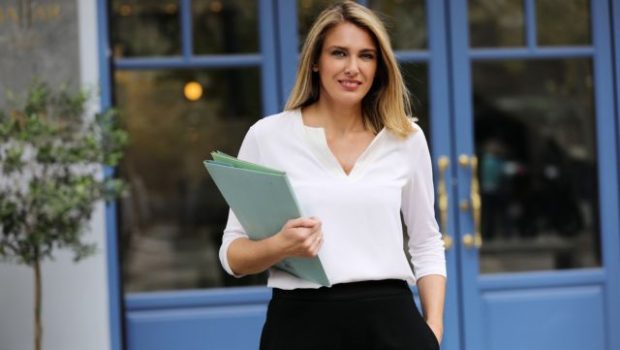 Originally from Grevena and educated at the Faculty of Law, School of Law, Economics and Political Science, Aristotle University of Thessaloniki, Anna Epthymeo Elected Member of Parliament of Thessaloniki with the new democracy.

Since 2004, he has been practicing military law in Thessaloniki, while his biography mentions his political path from DAP NDFK, ONNED and ND.

His name has come to the fore in the past few days as he allegedly has a salaried relationship with EFKA for his own benefit. SYRIZA MP Pavlos Polakis made the complaint Through his post on social media, among others, the total amount he collected from the contracts exceeded 100,000 euros.

If the complaints are upheld, he will be the third blue-collar executive after Patsis and Heimara to breach the MPs-government compromise.

Anna Efthymio was born in Grevena and has been living permanently in Thessaloniki since 1990. His father, Taxiarchis, was a professor of philology, and Birkos Ithomis was from Karditsa. His mother, Eleni, is a civil servant and hails from Grevena Cave. She has a brother who is an electrical & computer engineer and co-founder of Infoscope Hellas.

She is married to Giorgos Manos, an electronic and computer engineer in Folegandros, and they have two children, a son and a daughter.

Since spring 2004 he has been practicing law in Thessaloniki, while from September 2005 to June 2009 he volunteered his services as a lawyer at the Workers’ Legal Support Office in the Thessaloniki Labor Center. Since 2008, he maintains a law office in Thessaloniki, specializing in administrative, labor and civil law matters.

In the 2012 national elections, he was nominated as the ND representative. In the media of Northern Greece.

In the January 2015 national elections, he participated on the ND ballot. He received 11,491 votes as a parliamentary candidate in the first district of Thessaloniki.

In the September 2015 national elections, he participated on the ND ballot. 1st as a parliamentary candidate in Thessaloniki with a list structure of 8th.

In the 2019 elections, he was elected Member of Parliament for Thessaloniki with ND with 14,928 votes, placing him in 6th place.

What does she answer?

He categorically denied the allegations and speaking to ANT1, he said: “I have no contract with the state and I am not participating in any government agency in any capacity. My relationship with EFKA has been a mandate relationship since 2008 and I am flat-rate and without any profit margin. I deal with full price cases.”

He explained that these were old cases, which were assigned to him on the first occasion, which were completed on the second occasion before he was elected as a Member of Parliament.

As she underlines, her income is decreasing every year as she closes cases. As he told ANT1, he likes to list what he refers to in every detail.

See also  "Bombshell" Inside Story: Ties Between Maximos and Intellexa Have Long Been Close